Asus is very well known for their budget line smartphones. Asus has been touting and promoting their lineup of Zenfone Go series. Today we have the Asus Zenfone Go ZB551ML, which retails for RM549/US$135 at selected stores. The phone comes in various attractive colors to sharpen your style game. Though, I was lucky enough to get it in blue. Well done, Asus! 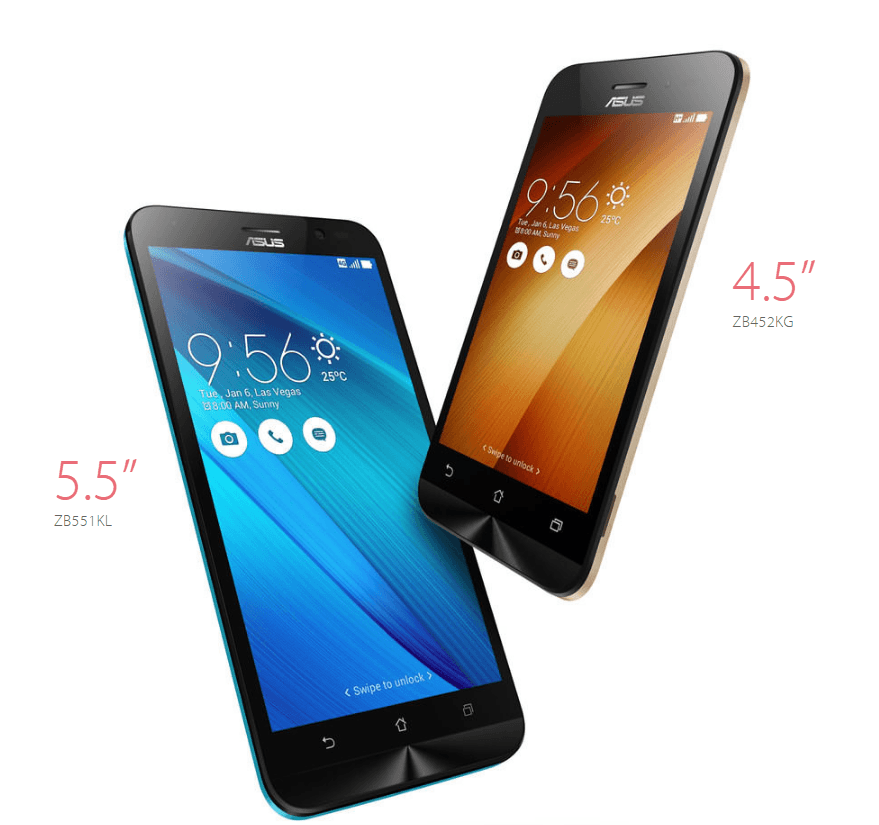 Asus’s Zenfone Go Lineup has two variants, the most obvious differences between both devices is the screen size, the ZB452KL at 4.5 inches and the ZB551KL at 5.5 inches. That’s not all for the extra cash spent on the ZB551KL its totally worth it, if that’s your thing. Here are the specifications of the Zenfone Go ZB551KL

The phone runs on ZenUI based on Android Lollipop 5.1.1. Asus has been pushing ZenUI on their phones and I don’t hate it. Its still good. 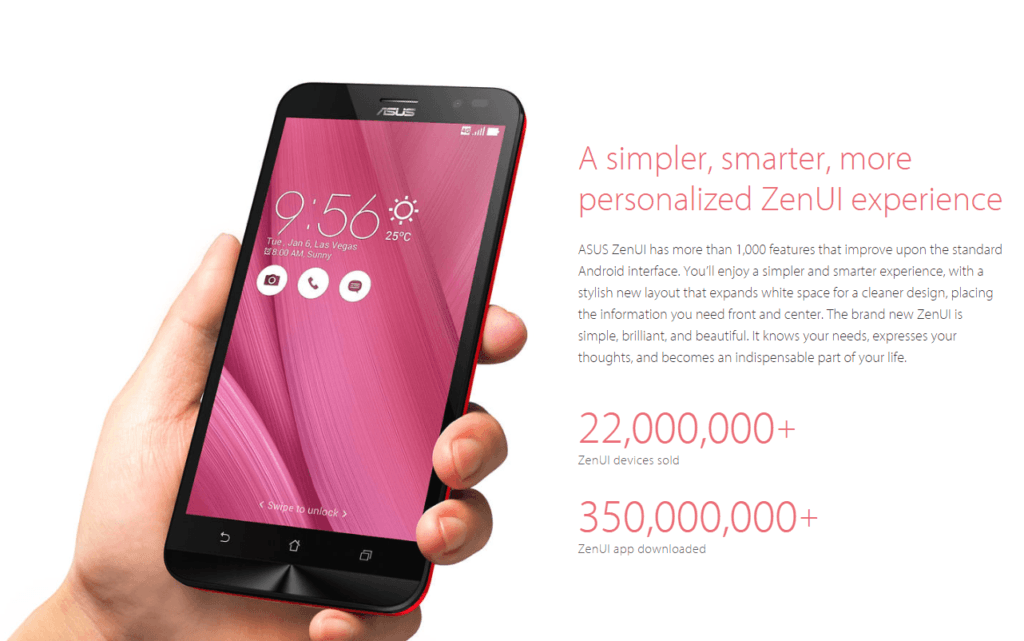 For those who really need the dual sim functionality, Asus is happy to provide you to insert two sims for your convenience! And yes, the phone is 4G is compatible. 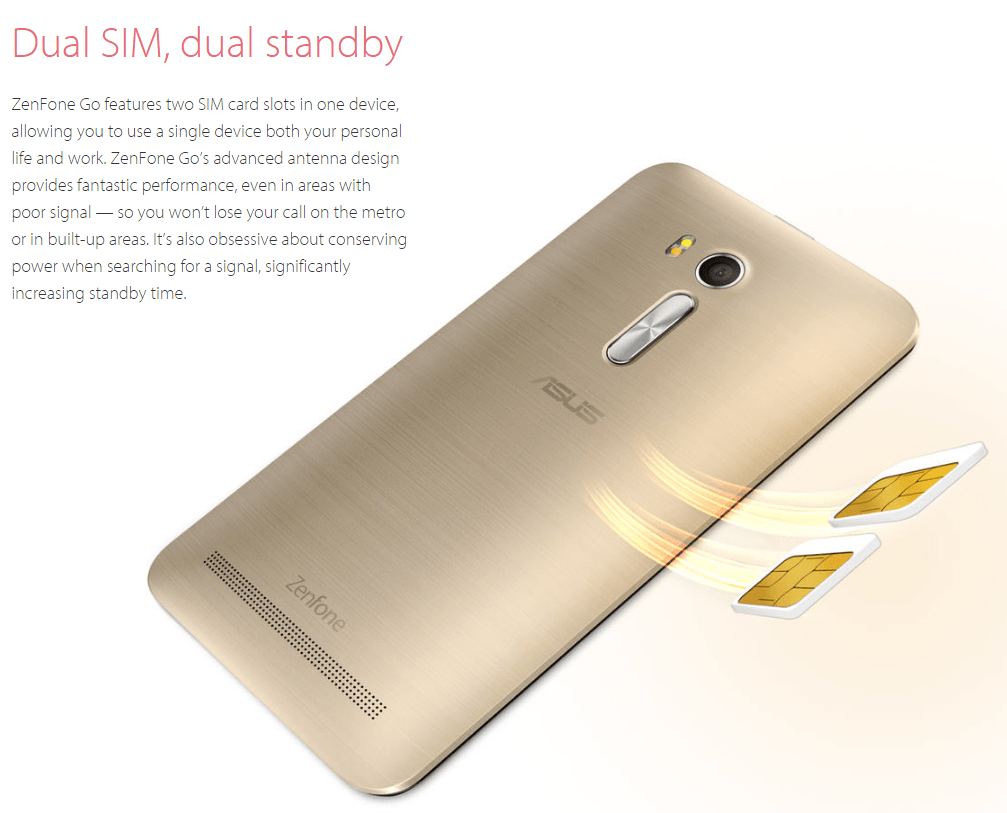 Moreover, the Zenfone Go ZB551KL has tons of colors to choose from. Someone really went nerdy at Asus!

The Signature Lives on!

The Zenfone Go ZB551KL is completely built of plastic which isn’t a shame for the price. The phone also comes with a variety of colors to choose from. The phone has a large 5.5 inch 720p screen covered with Corning Gorilla Glass 3. 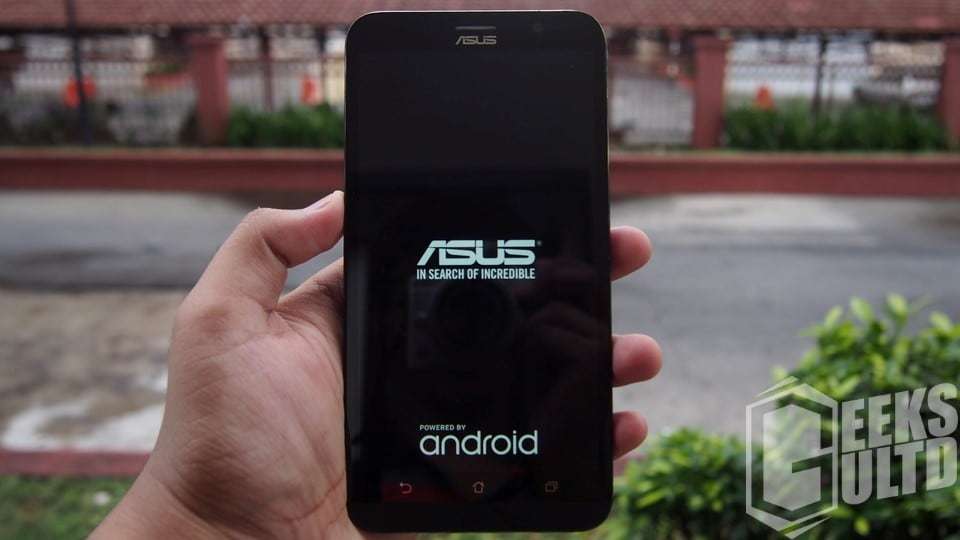 The phone continues to have the usual Asus signature style while having a decent weight to it to feel solid, that is to say 160g to be exact incl. the battery. The phone feels solid and has an okay finishing to it. The phone isn’t the best to hold, but its good in my opinion allowing my hand to rest around it.

How hard is this to break?

The build quality of the Zenfone Go ZB551KL is decent. I’ve had this phone for quite a long time, approx. two months. This phone I would say served very well until I dropped it, woops! The phone dropped on its side while taking it out of my pocket. It took pretty hard marks though but lasted well, everything was working, thankfully. I am happy to see that the phone didn’t have any marks or even visible scratches during my testing, including the back. Overall, seems the phone could last a while if you;re careful about it.

A great performer for the specs

Of course, the ZB551KL isn’t your flagship phone, neither is it meant to. The Asus Zenfone GO ZB551KL comes with Qualcomm’s Snapdragon 400 paired with 2GB RAM under the hood. The phone also comes with an Adreno 305 GPU power that 720p IPS LCD. Yet for a recap here’s the specs. 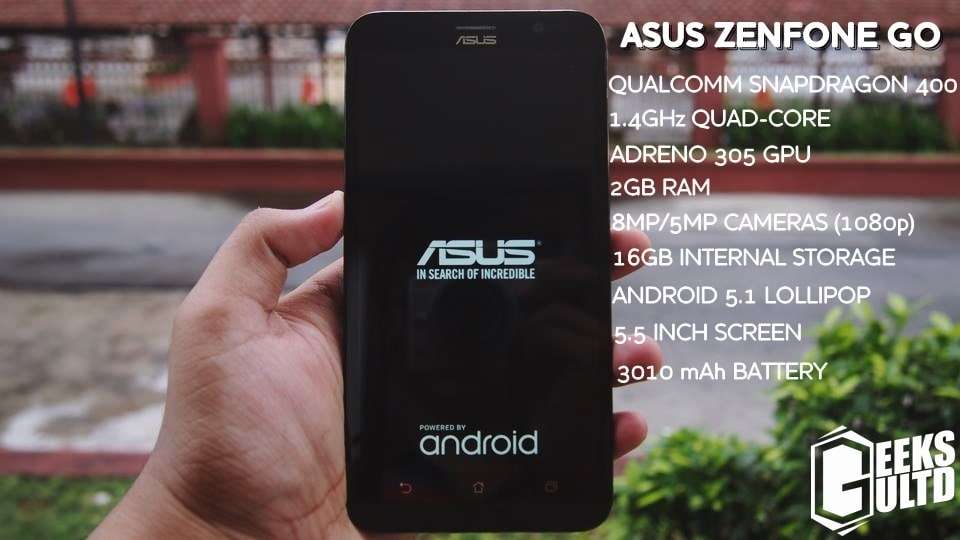 The Zenfone Go ZB551KL is no doubt an excellent phone handling most tasks. I am very pleasant to see the phone running smooth and resuming apps which the apps being completely refreshed. Okay so let’s be honest here, the phone does have good RAM management but the 2GB RAM sure has it’s limitations. But the RAM management played very well, having about more than 1GB of RAM free most of the time on a full reboot.

Playing games on the ZB551KL was also a decent experience allowing Asphalt 8 to run smoothly on Medium settings, crank up to high, and the FPS takes a big dip, though, the game is still playable. Next up we tested Real Racing 3 which is a fairly demanding title, the Asus Zenfone GO ZB551KL also manages to run it smooth enough. For those who want to play casual games that phone handles them very well.

Okay next up for the benchmark numbers.

As we could see that the Antutu scores are okay when compared to the similar Zenfone Max in specifications. Do note that we will continuously upgrade this graph in the future. Overall, I am happy with the performance offered by the Zenfone Go ZB551KL for the price, RAM management was good, performance was good and you could get some time off with games on this phone rounding up into a positive review. One thing Asus really needs to do is, please remove the bloatware from factory, that’s all.

A decent display that doesn’t disappoint

The Asus Zenfone GO ZB551KL comes with a 5.5 inch IPS LCD screen with a resolution of 1280 x 720 resulting in a PPI of 267 PPI. The Asus Zenfone 2 still continues to use a 720p display. Don’t get me wrong, its okay for the price, but I wish we could see an upgrade soon since the competition it getting tough. Its not bad though, its pretty good. Coming from a Xiaomi Mi4 which uses a 1080p screen at 5 inches, I wasn’t bummed for the 720p resolution on a 5.5 inch screen. Text is clear, colors are vibrant and the brightness outdoors is pretty surprising. Using the phone outdoors was a very pleasant experience. I haven’t reviewed much smartphones yet, but its been a while since we’ve seen such brightness on a screen for this price.

When it comes to audio Asus hasn’t always had the BOOM Sound record, the Asus Zenfone Go has rear facing speakers which sound pretty low when compared to other smartphones. The phone produces clear audio and is enough to let you hear audio in a decently quiet room. Watching Youtube videos are an okay experience, sometimes forcing me to make cups in my hand to get the sound to me in noisy environments, but it works.

Overall, the Media Consumption experience was pretty good with the device.

The camera on the Asus Zenfone Go is a mixed bag of opinions for me. The Asus Zenfone Go ZB551KL sports an 8MP Rear Camera capable of recording videos upto 1080p, seems impressive? Well yeah the phone records upto 1080p but it only works well for well-lit outdoor situations even then the camera isn’t a breakthrough, but this was totally what I expected for a phone for this price point. The phone seems to offer “Video Stabilization” but I am pretty sure it does this by cropping, turning on Video Stabilization results in the phone to drop its resoltion from 1080p to 720p, it cannot be used in 1080p. 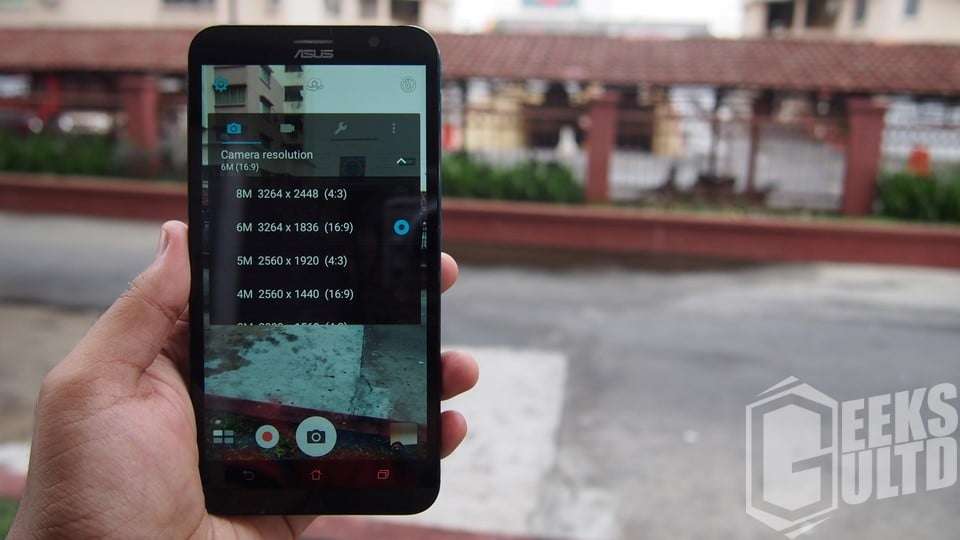 Using the Asus Zen UI camera app is a simple breeze. It auto detects the scenario and prompts to switch to it. The camera UI is smooth with minimal shutter lag but I was quite disappointed with the rear camera, but this is what I expected for the price. Here’s a few sample shots. Judge for yourself.

All images were taken as a normal user would, snap and go. We tested in the modes that were possible for each scenario. Though, I was really pleased with the front cam. In indoor environments it takes good selfies if that’s your game.

The Asus Zenfone Go ZB551KL uses a 3010mAh battery to keep it running in my daily tests the phone easily gets through my day in medium usage. Part of this credit goes to Qualcomm’s Snapdragon 400. Watching Youtube videos could easily run for 6 hours from full charge. Playing Asphalt 8 on High resulted in a bettery decrease of 15% in 30 minutes, impressive. The phone takes about 2 hours to completely charge. 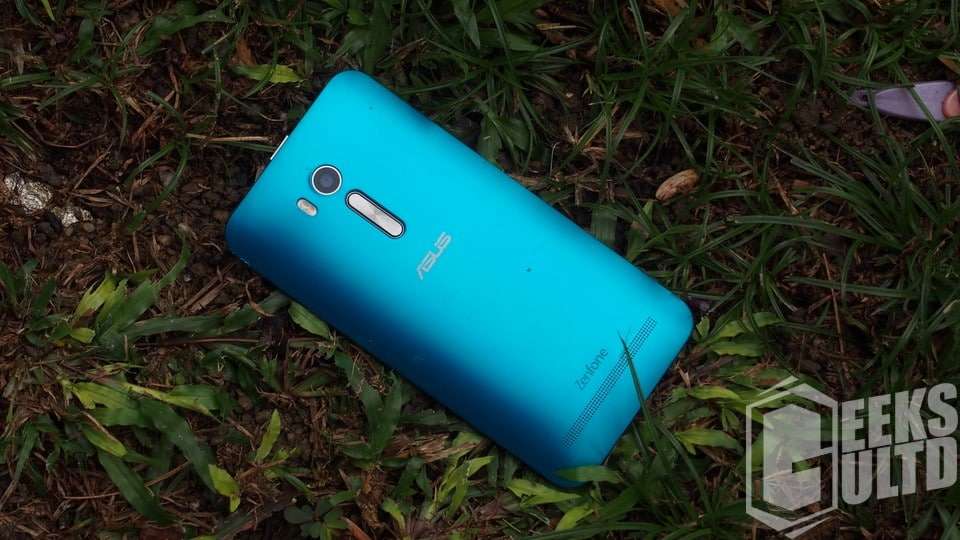 As we said earlier, Asus Zenfone Go ZB551KL has tons of compeition from their rival companies. Here are some of the Zenfone Go’s main competitors 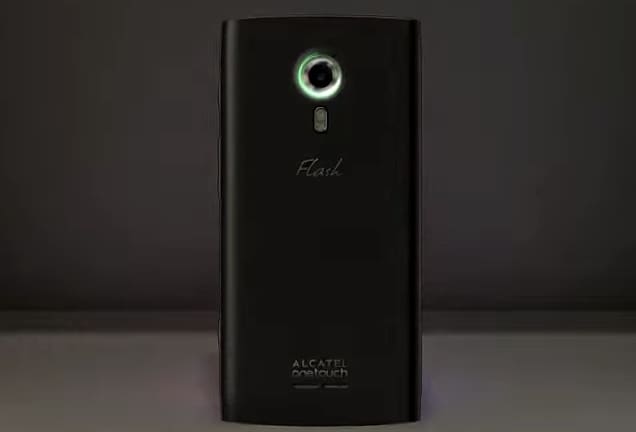 The Alcatel Flash 2 comes in at a price of RM599, certainly higher than the Asus Zenfone Go ZB551KL. It comes with MediaTek’s MT6753 coupled with 2GB of RAM and 16GB of internal storage. it also comes with a 13MP camera which is capable of recording upto 1080p.

Next up, Lenovo’s Vibe P1M comes with similar specifications. It comes with MediaTek’s MT6735P CPU, 2GB of RAM, 16GB of internal storage and a 13MP camera. 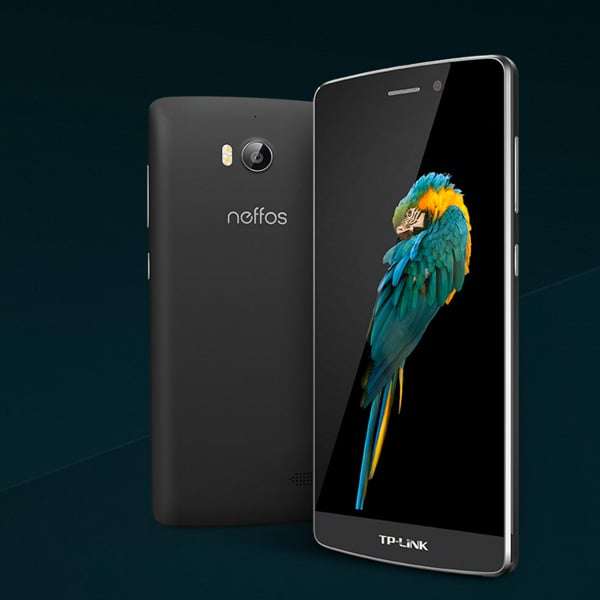 Lastly we have a new smartphone on our list, the Neffos C5 from TP-Link, some techies might know TP-Link but essentially they manufacture networking products. Recently the took their approach on smartphones. The phone has a very appealing design to it. Yet again comes at 5 inches with a 720p resolution. It runs on Mediatek’s MT6735 paired with 2GB RAM and 16GB of internal storage. This time, the Neffos C5 comes with an 8MP rear camera and a 5MP front camera.

To be honest, Asus has made the Zenfone Go a great phone for such a low price. Sure it has its competitors, but if we talk solely about the conclusion of the phone, the Asus Zenfone Go may be cheap but Asus have done it right. They tick-marked most of the boxes, ranging from the Design, Display and the battery life which was very impressive. However, the phone isn’t perfect, the phone still needs some more volume and an improvement in the rear camera department. For the price of RM549, its really a personal preference. There’s a lot of competition, but the Zenfone Go isn’t holding anything back.