With the launch of Kaby Lake processors, Intel finally crossed the 5GHz line for consumer chips. Of course we’ve seen Intel chips hit much higher than 5GHz before, but that was achievable with Liquid solutions. With Kaby Lake, Intel’s unlocked processors are passing the 5GHz mark for most of the part. With the early tests passing by, we’ve seen Intel’s Skylake and Kaby Lake performing identically clock for clock but what Intel’s optimization allowed is adding faster memory even for non-k processors. In a recent test by Digital Foundry, the folks at Digital Foundry found out that Intel’s Kaby Lake processor not only takes advantage of the higher clocks with the K chips, but also takes advantage of faster RAM sticks. 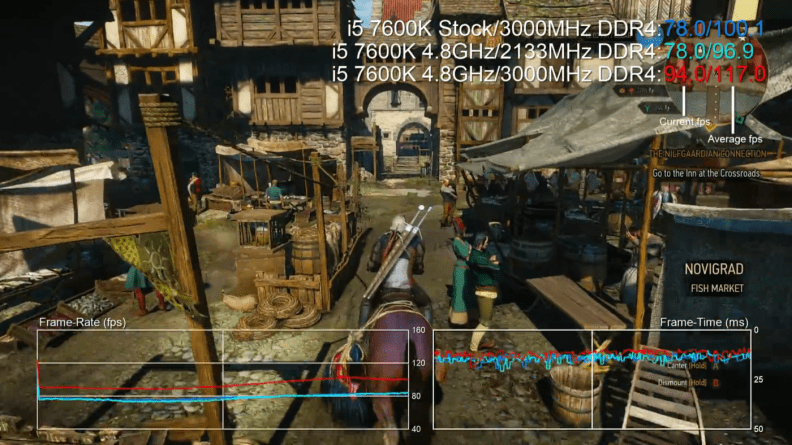 Until this point, or even before Skylake, we haven’t seen any major boosts in performance with fast RAMs, but with Kaby Lake, Digital Foundry’s tests show that the new chips actually perform exceptionally well in games if the GPU wasn’t the bottleneck in the first place. Richard from Digital Foundry also noted the advantages that locked Intel Core Processors will come with thanks to the fast RAM support from Skylake @ 2133MHz to Kaby Lake @ 2400MHz. Comparing it all the way to Sandy Bridge is actually shows a 30%~ advantage on the Kaby Lake chip.

Additionally, setting the Sandy Bridge chip in line with the Kaby Lake 7600k actually resulted in a 20FPS~ boost. However, dropping down from the Titan X to a GTX 1060 actually brought back the results in line.

Of course if we compare Skylake to Kaby Lake clock for clock we’ve already seen many outlets proving that there’s no IPC changes accross the board, although the faster memory and higher overclock should really be teasing users who are still rocking older chips.

Are you willing to upgrade? How do you feel about Kaby Lake? Let us know in the comments below!