Logitech is no stranger in the peripheral market. The Swiss company has built an excellent reputation in the gaming scene for the same reason and is looking forward to continue catering to the industry. Logitech’s recent release aims to give hardcore gamers a ten-keyless keyboard dubbed as the G Pro. Logitech has an excellent slew of peripherals using the G sub-brand, but hey, since they’re gamer-centric, there’s always room for improvements.

The G Pro that we have today stems from Logitech’s excellent G810, a keyboard that excels in almost category. The G Pro seems to be the miniature version of its elder, yet bigger brother. Although due to its shorter length, the G Pro’s appeal could not be underestimated. 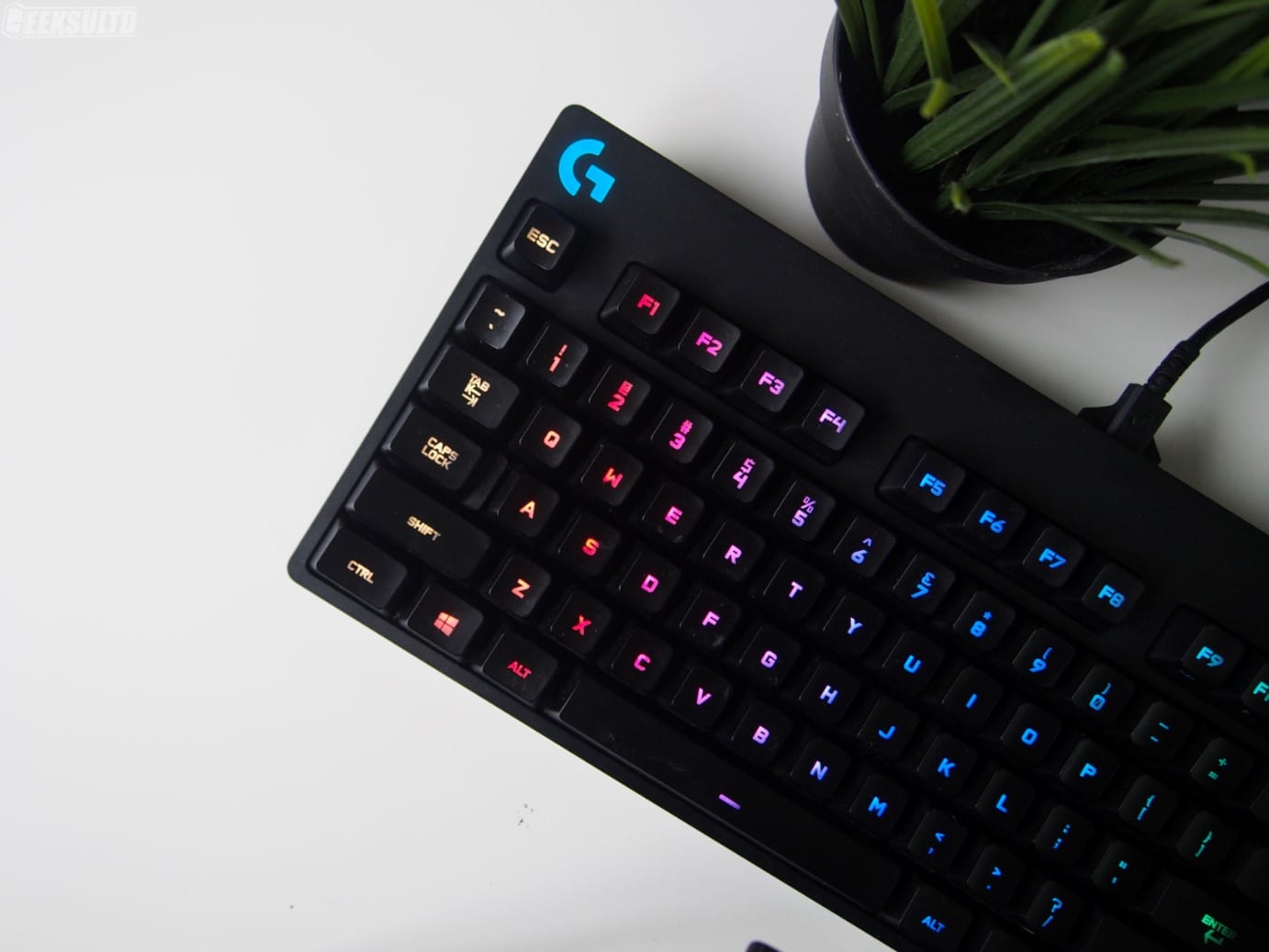 Logitech’s recent design and layouts has been pretty pleasing, at least to my eye. With Logitech taking on a more minimalist approach to their keyboard design, Logitech definitely knows how to adapt to trends. With the G Pro being designed with almost minimal design changes in mind from the G810, Logitech definitely has kept the ‘pleasing’ factor for their G Pro alive.

The Logitech G Pro is a 10-keyless mechanical keyboard, which means that you’ll immediately notice the absence of the Numpad that usually sits at the utmost right of the keyboard. At this price point, RGB becomes compulsory and since its Logitech’s highest-end keyboard, they really want to show off what their Romer-G switches could offer.

At the moment, the G Pro is only available in black. But hey, who knows, we might see a white variant of the keyboard in the future despite it being unlikely. 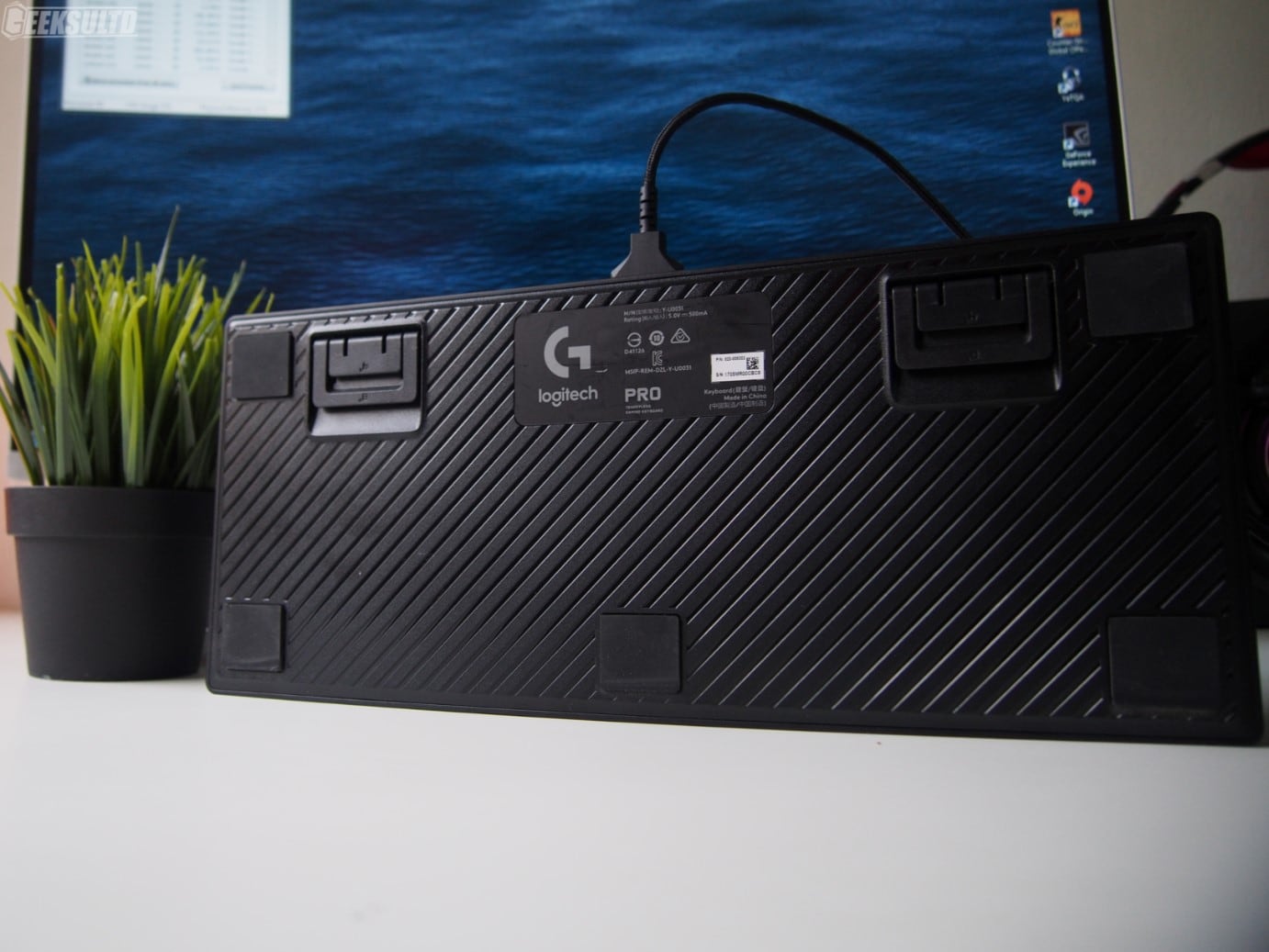 Regarding build quality, I’m pretty pleased! There’s absolutely, if not, minimal flex within the integrity of the keyboard and the detachable cable is braided too. We could give part of the credit to the strong materials used that make the G Pro weight 980g without the cable. Meanwhile, the 1.8m cable seems to be pretty strong and would last users for a while.

The Logitech G Pro plants itself pretty well within its surface thanks to its five rubber feet. Along with the help of its dual angled stands, the Logitech G Pro could adapt to many user’s preferences pretty well too. Logitech is giving the option to users to adjust the keyboard at two angles, either at 4° or either at 8° which could appeal to a number of users. 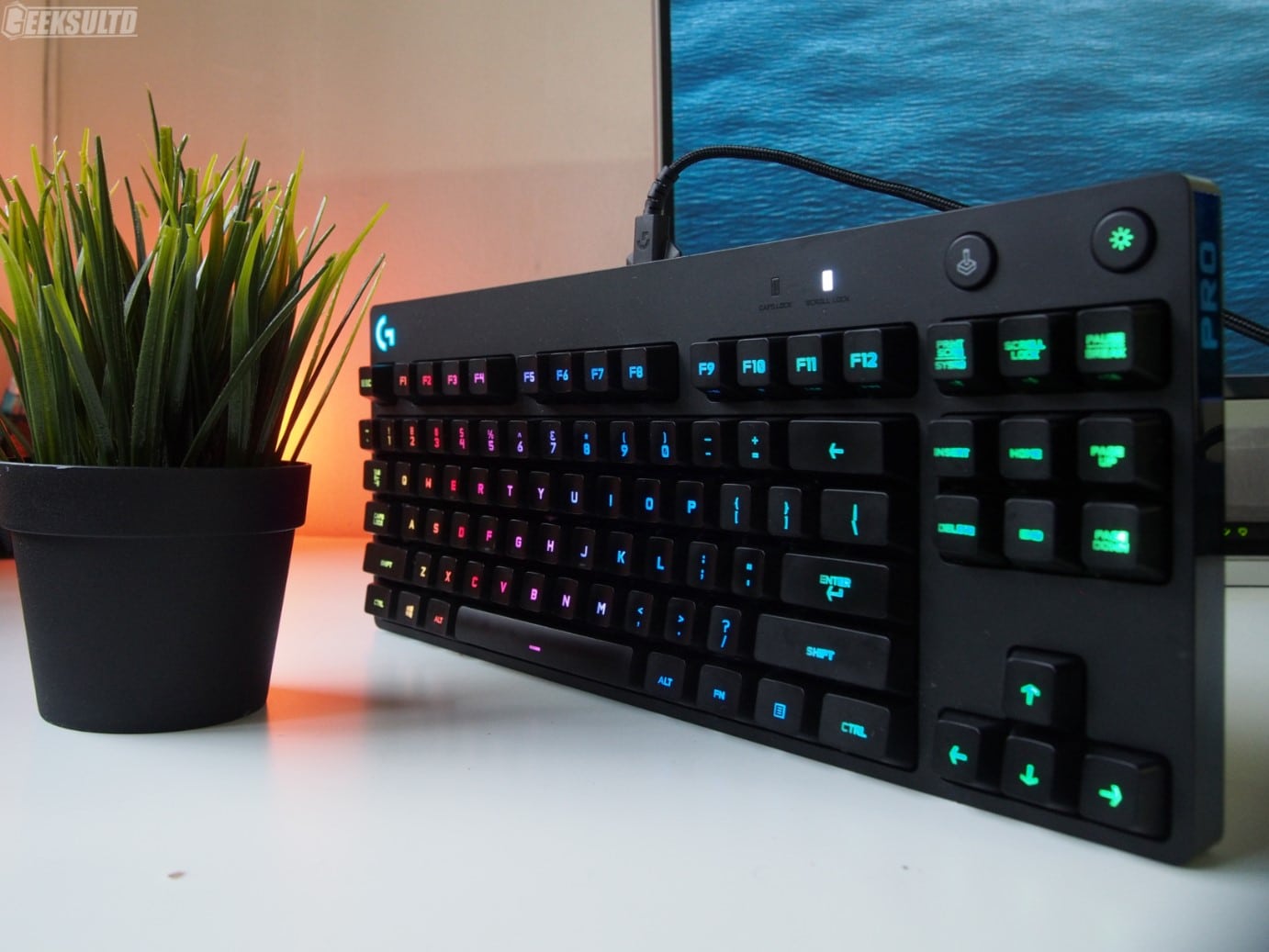 It would be evident by now that the Logitech G Pro isn’t for everyone. The Logitech G Pro has its target audience and seems to be catering it very well. The ten-keyless design makes the Logitech G Pro very appealing to many gamers and keyboard enthusiasts. The shorter footprint doesn’t only make for an appealing showpiece for many, but also creates a considerable amount of room for gamers who use their keyboards diagonally.

However, I am against Logitech’s decision of removing the volume knob. I think adding that knob would have added a ton of flare to the keyboard. However, in return would have affected Logitech’s minimalist approach to their recent keyboards. But all in all, there’s definitely a bit of design work that Logitech could have worked on. 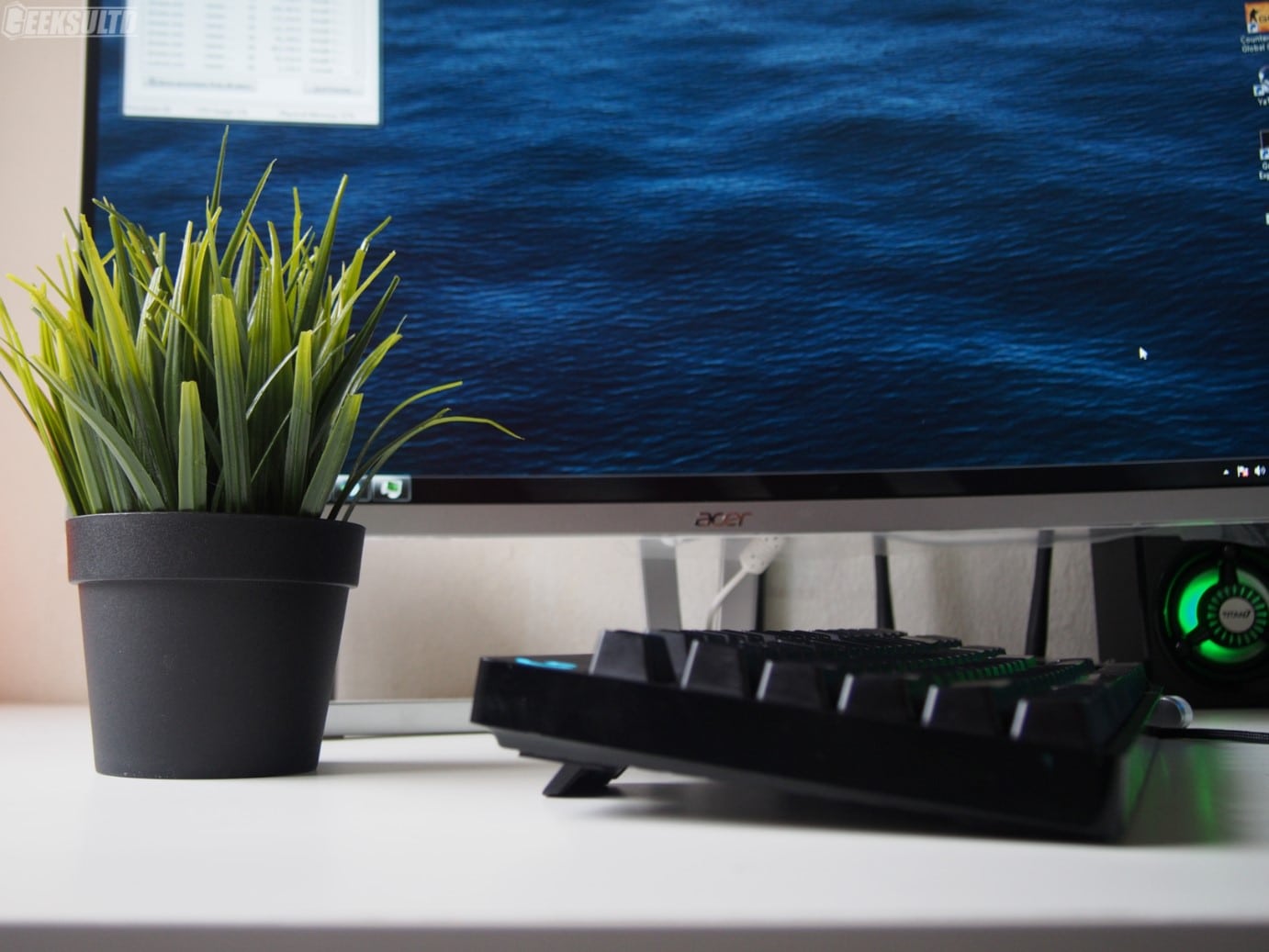 As expected, the Romer-G switches are excellent and have an excellent reputation for lasting a while. The keys have an actuation distance of 1.5mm compared to the competition’s 2mm actuation distance. What this means is that the keys don’t require as much of the distance to be pushed to be activated. While subtle, a lot of keyboard enthusiasts care about it. Logitech’s Romer-G switches really lack the sounds of the Cherry MX Blue counterparts. However, they are closer to MX Browns and Reds if that’s your thing. The Romer-G switches lack the coil whine that a lot of key switches produce. While this may be pretty unexpected, the keys perform admirably and gets a strong recommendation from us. Compared to Cherry MX key switches, Logitech claims that their keys could last much more longer, withstanding over 70 million keystrokes compared to 50 million on Cherry’s side.

While CS:GO is no stranger to the e-sports world, I could definitely tell you that the Logitech G Pro’s smaller footprint felt much better thanks to the extra room I had regained from the G810. I had much more room for the mouse to move which resulted in much better gameplay.

Regarding the fulfillment of RGB, the G Pro has got you covered. Although, there’s no way to customize the RGB lighting unless you download Logitech’s Suite which is quite a bummer. Logitech hasn’t embedded any presets within the keyboard although it is definitely possible to do so.

Overall, the typing and gaming experience was definitely a delight. Although people who aren’t gamers might want to stick to traditional keyboards.

The Logtech G Pro isn’t cheap, that’s for sure. Being a keyboard that tackles enthusiasts head on definitely raises a lot of eyebrows, but the Logitech G Pro does an amazing job at catering these gamers and would definitely satisfy many gamers that’s for sure. For a price of RM 549 in Malaysia, I think the price is a bit high, but hey, again, Logitech’s target customer won’t usually mind such a price. Afterall, the keyboard performs like a champ and would last for years to come adding to Logitech’s wall of fame, if there is any…

Can’t wait to see what Logitech has in store for 2018 and in the years to come. 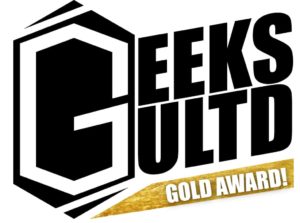 Top 3 Beginner-Friendly Tools to Create Images Without a Background

Know About Ben Shapiro And Abigail Shapiro Political Views On Any Topic.