The newly announced Mi MiX 3 is an absolute beast. Although, unlike many Xiaomi phones, the Mi MiX 3 is more than just the spec sheet. On the inside, the Mi MiX 3 features a Snapdragon 845 SoC, up to 10GB RAM, up to 256GB internal storage and a whole lot more.

Regarding the display, we’re looking at a 6.39-inch Full HD+ 2340 x 1080 AMOLED display featuring a 19.5:9 display ratio and up to 600 nits. Being an OLED panel, the display on the Mi MiX 3 also features an incredible contrast ratio, an always-on-display, and HDR.

For photography enthusiasts, there’s nothing new in the hardware department apart from a few tweaks to its algorithms. The Xiaomi Mi MiX 3 still sports the classy Sony IMX 363 sensor at the back among the Samsung telephoto shooter at the back. Coming over to the front cameras, as expected, Xiaomi has finally moved the selfie camera to the front of the display to finally get rid of the bezel. Not only did Xiaomi reposition it, but Xiaomi also added an extra 2MP sensor dedicated to gathering depth of field data. The rear camera setup consists of a 12MP+12MP affair while the front cameras consist of a 24MP+2MP array.

However, one may note that like previous launches the Mi MiX 3 also lacks 4K/60FPS recording which is a complete bummer given that it has become a standard with devices powered by Qualcomm’s Snapdragon 845 SoC. Furthermore, the Xiaomi Mi MiX 3 supports 960FPS slo-mo for those incredibly slow shots.

As highlighted previously, the Mi MiX 3 has finally “almost” got rid of the chin”. While the device looks incredible at first sight, it may take you a while to notice the chin at the bottom of the device.

Regarding the 5G capabilities of the device, Xiaomi was teasing at the event, turned out that it didn’t show up. Instead, Xiaomi has promised to release the device in Europe first while 5G matures in the region. In addition to that, as highlighted previously, the Xiaomi Mi MiX 3 comes with a 10W fast wireless charger out of the box.

Regarding pricing and availability, the Mi MiX 3 is currently available in China only. However, given Xiaomi’s global presence and the fact that they’re planning to announce another Mi MiX 3 variant capabilities in the near future, we could expect them to launch these 4G-enabled devices soon in a number of regions. Regarding pricing and variants available for the device, the device is set to start at just RMB 3,299 / $475 that features 6GB RAM and 128GB internal storage and would only be available in black. Regarding the rest of the variants, the Mi MiX 3 would be available in an 8GB+128GB variant, 8GB+256GB variant, and a  10GB+256GB variant. Each of those will go for RMB 3599, RMB 3999 and RMB 4999, respectively. 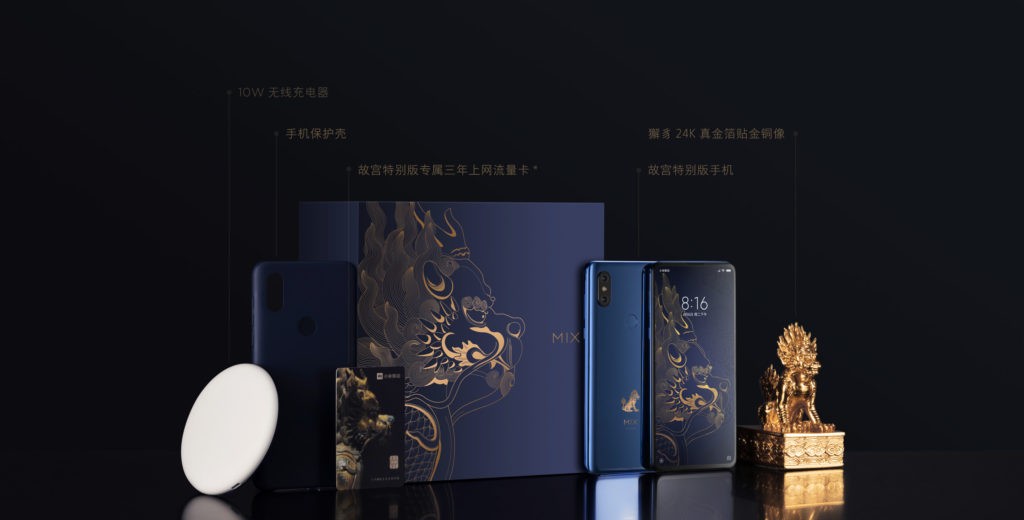 Out all of the colors available, the 10GB variant is a limited edition launch dubbed as “The Palace Museum Edition”. Those who buy the limited edition 10GB variant would be getting themselves a one-of-a-kind device featuring some incredible theming. The rest, as standard, would launch in three colors, namely, green, blue and black.