We’re about to wrap up 2018 and without a doubt, 2018 has been an incredible year for the Chinese market. With companies like Huawei, OnePlus and Xiaomi now pushing their way out of the Chinese market, brands such as Samsung and Apple are certainly feeling the heat. According to a report prepared by the folks over at Canalys, 52% of the smartphone shipments commenced worldwide originated from Chinese brands.

Additional key details reported by the folks over at Canalys included the market share some of these major brands hold and how a lot of these regions have dropped their demand for smartphones. In addition to that, the report also details annual growth rates for these phones since last year.

Regarding annual growth since Q3 2017, Pretty much every Chinese brand has seen in increase in overall sales with Samsung continuing to slide down the slope. According to the report, the report records that Samsung has seen a 13.9% reduction in sales over the past year while brands like Huawei, Apple, Xiaomi and Oppo lead with 32.7%, 0.5%, 19.5%, and 3.4% increases since last year.

Regarding demands by region, China has seen a major reduction in demand with a 15.2% reduction followed by India, US and Brazil seeing 1.1%, 0.4% and 9.5% reductions during Q3 2018. However, on the flip side, countries such as Indonesia, Russia and Germany have seen immense growth ranging from 13.2% in Indonesia to 2.4% in Germany. 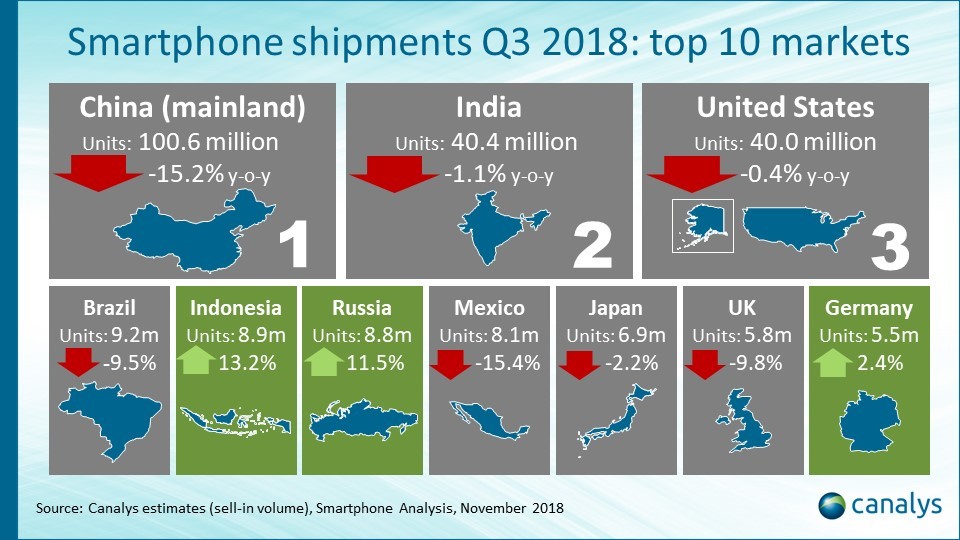 Certainly competition from the Chinese market is continuously getting aggressive by the day. With the likes of Xiaomi, OnePlus and Huawei now targeting markets outside of China, Chinese smartphone makers are now expanding at an alarming rate that seems to be surrendering Samsung’s lineup of devices at every price point.

With Huawei and Xiaomi now focusing on Europe for quite a while, OnePlus has become the first major brand to establish a deal with a US telecommunications operator with the launch of the OnePlus 6T, eventually allowing the Chinese brand to make its way into the US. While Huawei and Xiaomi may be lagging behind when it comes to penetrating the US market, it’s nice to see Xiaomi and Huawei become just as prominent recently in the region. Other relevant news acquired from Xiaomi themselves indicated similar success stories as well. According to the Director of Product Management at Xiaomi, Donovan Sung, Xiaomi has exceeded its target of smartphone shipments by 10% since last year and still has two months to go. If Xiaomi continues to see consistent growth this could very well mean that Xiaomi could hit the 120M mark by the end of 2018.

With Chinese brands now penetrating into regions that were once dominated by the likes of Samsung and Apple, it seems like the two “Apples and Galaxies” would have to do more than just releasing iterative upgrades to their devices. As Chinese brands continue to innovate and outsell the top dogs of the smartphone market, it seems like Samsung and Apple would have to get their engines running again if they do not want to be left in the dust. So far, there’s a ton of expectations from Samsung next year, especially with the Samsung Galaxy S10 lineup. So far, we’ve learned quite a lot regarding the next big thing from Samsung, possibly “the biggest” thing from Samsung yet. So far, we’ve learned about Exynos 9820 SoC, its triple rear camera setup, its variants/names, and its new fingerprint scanning techniques. As intense it may sound, 2019 would definitely be a key year as a flipping point for Chinese brands, but it would also be a key year of innovation on every front as 5G makes its mark throughout the industry in 2019.