Samsung has recently shown off one of their foldable devices at SDC 2018. With the company still posing the device as a “prototype” rather than a consumer product at this very moment, it won’t take long before Samsung really starts to push the trend towards foldable devices forward. According to a report published by the folks over at IHS Markit, Samsung’s push towards a foldable future could very well explode within the next few years and phones progress into the future. 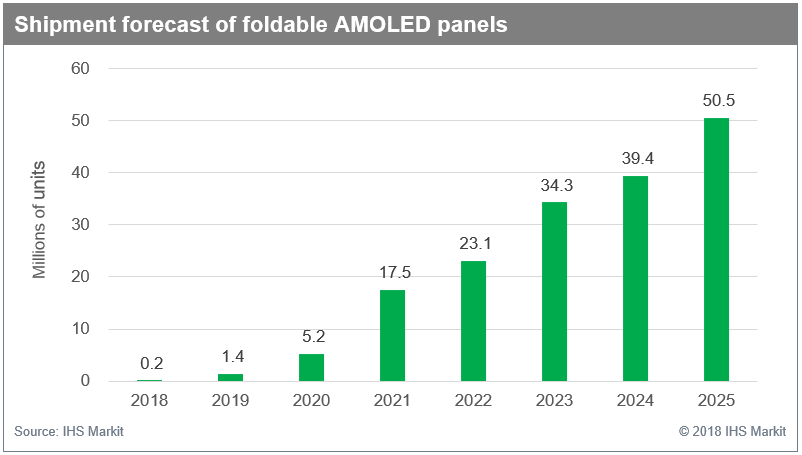 Certainly, the Galaxy S10 and Note 10 aren’t going to be blessed with these displays. According to recent reports, Samsung’s Galaxy Note 10 would pack a 6.66-inch display. However, what may follow those two devices in 2020 could be major for both the company and the industry itself as a whole, eventually setting standards for the industry. And if that’s the case, it’s evident why we may see a huge spike in demand for such panels in 2021 as the illustration above depicts.

Without a doubt, the price of such devices and panels would play a huge factor in determining how well the demand for these flexible AMOLED panels would turn out and certainly the technology isn’t going to be cheap anytime soon, at least for the next two years. After all, leaks and rumors have always fantasized what a foldable future may look like with foldable phones and with Samsung now leading the pack, who knows what else the future would hold for smartphones.

Certainly, we’d bet that a lot of the major brands do have the idea in their recipe books even though their blueprints may not be of much use many years down the line. With companies such as Samsung leading the pack, it would be interesting to see how well other brands adopt the technology over the next few years and how well these new display designs would phase out our traditional “notched” displays.

Definitely interesting times ahead and something we’re definitely looking forward to, especially regarding the next few years. Samsung definitely needed a boost as Chinese competition continues gains up on Samsung, and it seems like, this may do the trick.