Samsung Galaxy S10e Review – Trumping OnePlus At Its Own Game 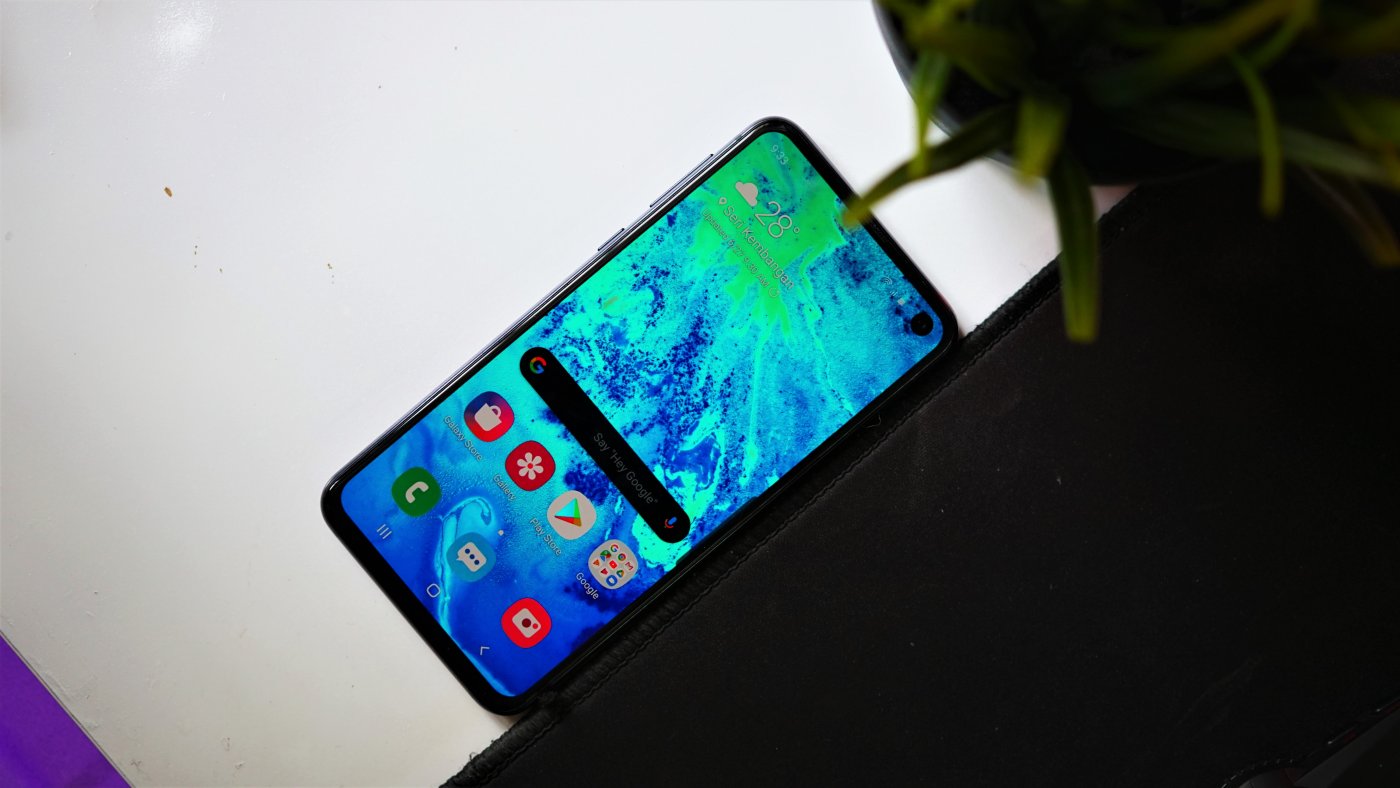 Samsung is no stranger in the mobile market. Over the past few years, the South Korean giant has been hard at work keeping loyalists and the mid-range market happy.

Following the launch of Apple’s iPhone XR, Samsung decided to follow suit and launch their own “entry-level” flagship dubbed as the Samsung Galaxy S10e, not only allowing Samsung to diversify their options even further, but also compete in the upper mid-range segment, a segment that Samsung hadn’t been able to entice thanks to the introduction of rivals from China.

The Samsung Galaxy S10e, like the Apple iPhone XR, shares a lot in common with its elder brothers, the XS and XS Max. However, Samsung is the one with the decryption codes decided to push the S10e up a notch, making it a more attractive option on paper.

Samsung continues its use of glass and steel on the Samsung Galaxy S10e. It’s built with glass on the front and back with steel railings surrounding the phone. What it hasn’t continued on is its design language that defined the Samsung Galaxy S9 and S8 series of devices, completely ditching the little forehead and chins its predecessors had left. With this change, Samsung pushed the selfie camera embedded into a cutout within the display to keep things looking neat.

While Samsung had been holding out on the notch, their punch-hole seems to have garnered a ton of attention despite still taking up a considerable amount of real-estate on the display. But it seems like not being connected to any of the side railings seems to be the more attractive option after all.

Unlike its predecessors, Samsung has re-done the button layout on the S10e and its elder brothers. On the S10e, you’re looking at the addition of the Bixby button over on the left beneath the volume rocker. Over on the right, Samsung has gone for a fingerprint sensor embedded within the power button keeping it clean.

Samsung, in typical fashion, has had included a decent amount of options to play around with the display including a dark mode that Samsung dubs “Night Mode”.

Core apps such as the Calendar, Messaging, Dialer, the Settings section were pure black with a hint of grey here and there. Even though it’s not the best implementation of a Dark mode, it was definitely respectable that Samsung decided to include it on the S10e with its AMOLED display.

Coming over to the audio side of the Samsung Galaxy S10e, I was pleased to hear how well the S10e’s speakers perform. There’s a driver embedded within the earpiece as well as one driver beneath the phone. And while everyone rambles about how the bottom-firing speaker could easily be blocked with your hand, I’m yet to figure where else Samsung could put the speaker on the device.

Regarding audio quality, there isn’t a whole lot to get excited about, but they do get the job done. The speakers on the S10e had a decent amount of volume and more than enough clarity. With that being said, the inclusion of the headphone jack is definitely respectable, especially now that Samsung has axed it from the Galaxy Note 10 and Note 10 Plus.

The Samsung Galaxy S10e comes with an Exynos 9820 under the hood, at least for the devices that Samsung releases in the Asian market. While the Qualcomm variant does get a ton of attention, the 9820 is a decent performer in of itself too.

→  "Memoria" Is a Truly Unique Film: Movie Review and All Things You Should Know About It

Coming over to the overall usability and UI of the Samsung Galaxy S10e, I’d bet most of the enthusiastic folks reading here would be aware that the S10e comes running Samsung’s new One UI software under the hood. Samsung’s new One UI brings a major facelift to Samsung’s dreaded TouchWiz UI that Samsung has been rocking and updating over the years.

Samsung’s new One UI retains a whole lot of the classic Samsung characteristics but still manages to feel new and fresh if you’ve been using Samsung devices for the past few years.

Memory management seems to be fine. Not too bad and not too impressive either. At times, I found that when I recalled a number of apps that I had been using a few hours ago, it would usually reload the app as if nothing had happened. Other than that, the phone ran smoothly. No hiccups and that’s great!.

Regarding gaming performance, the Samsung Galaxy S10e performed admirably well in pretty much every game I could throw at it. And while I’m not a hardcore mobile gamer, Real Racing 3 and PUBG Mobile have been my picks for the past few years, and both ran admirably well on the S10e. With that being said, I think it’s safe to say that pretty much any phone released nowadays is able to perfectly cater to folks who are into casual games.

Sadly, the Samsung Galaxy S10e, along with the S10 and S10 Plus lacks UFS 3.0 and sticks with UFS 2.1 here. And while it’s a major upgrade over the now-dead eMMC storage, it’s sad to see that Samsung managed to supply OnePlus with UFS 3.0 rather than packing it in the S10 family of devices.

→  HTC One A9S Review: The Slippery All-Rounder From HTC

Coming over to the video side of things, the Samsung Galaxy S10e is capable of recording videos up to 4k/60FPS. However, the S10e is unable to record videos with its ultra-wide shooter, making its a bummer for folks who really wanted to take advantage of that extra FOV.

Shots taken outdoors and indoors are incredible. However, things get a tad bit shaky when shooting at night. Sure, the inclusion of a Night Mode was urgently needed, especially with Google and Huawei trumping the competition. But the way how Samsung handles night mode is definitely something they could work on.

Shots taken with the night mode enabled look okay on the surface. However, outdoor shots with dark skies and dark rooms often cast a whiteish-blue tint, suggesting that the only thing that Night Mode does on the S10e is simply lengthening the shutter speed, and that’s about it.

The Samsung Galaxy S10e features a 3100mAh battery along with a 5.8-inch display.

The Samsung Galaxy S10e isn’t a major athlete in durability tests, I’d bet many smartphone fanatics may have been expecting that. Despite the smaller size and partly thanks to the 3000mAh battery, the Samsung Galaxy S10e managed to last me about 4-5 hours on a single charge, but that’s when I was hoarding on social media apps non-stop. I personally don’t use my phone that much, but when I’m out on a trip, I’m guilty of using my phone non-stop.

However, if you don’t use your phone that extensively, the Samsung Galaxy S10e did manage to last me about 75% of my day on average before requiring another charge. And while that’s not incredible, it’s definitely okay for many folks who do use their phone for a few hours a day.

And while all of that may be fine for many folks, the worst thing about the Samsung Galaxy S10e has to be its 15W fast-charging adapter that Samsung includes inside the box. Samsung was expected to increase the charging speeds to a respectable 25W on the Samsung Galaxy S10 family of devices by the time the S10 5G came around but it seems like Samsung has pushed the whole topic under the rug for now.

The Samsung Galaxy S10e retails about RM2,099 in Malaysia and about $570 in the USA. For under that price, you could either fork out for a OnePlus 7 or a Xiaomi Mi 9, both phones that save you a bit of your buck. But then, if you were going for the OnePlus 7 in the first place, you’d rather pick up the Galaxy S10e for a bit more. Over the OnePlus 7, not only are you getting an ultra-wide camera, but you’re getting a newer design, wireless charging, and an incredible form factor.

What remains to be bummed about the S10e has to be its mediocre low-light performance and its bundled slow charger, and that’s about it.

Samsung Galaxy S10e Review – Trumping OnePlus At Its Own Game
Conclusion
The Samsung Galaxy S10e is a major recommend from me. Not only does it come with an excellent design, but it also comes with an excellent design, support for wireless charging, an excellent set of cameras (indoors and in daylight), an excellent display, and an excellent compact size to top it off.What remains to be bummed about the S10e has to be its mediocre low-light performance and its bundled slow charger, and that's about it.
The Goods
Excellent Display
Excellent Cameras
Comes with a 3.5mm headphone jack
The Bads
Still uses UFS 2.1
Decent Battery Life
Mediocre Charging Times
Lackluster Low-Light Camera Performance
8.1
Share
Facebook
Twitter
Pinterest
VK
WhatsApp
Previous articleCooler Master MasterLiquid ML240L RGB Review – A Killer Entry-Level Water Cooler
Next articleRED Magic 5G Set To Launch In The USA On April 14th Alongside The OnePlus 8 Series

Invert Your Pc Case, Best-inverted Pc Cases Are Available for You to Check Out New Features…