FIFA Ultimate Team’s game mode was released by EA SPORTS a few years ago and has since been a mainstay of the format. FIFA 22 continues this trend, allowing gamers to compete against a bunch of teams offline. Depending on how many rounds you play and the difficulty level, you’ll be able to earn different types of rewards.

The benefits for reaching a certain level are vastly different. If you want to get the most out of the mode, you’ll need to put in a lot of effort. Even if the awards aren’t exciting, players that play a few matches a week can use them to strengthen their squads. With Squad Battles, you can play up to 40 matches a week to collect Battle Points, which are subsequently used to decide your overall place on the leaderboard. The more Battle Points you acquire every match by playing against more challenging opponents, the higher your Rank will be. Rewards for Squad Battles will be based on your ranking towards the end of the week.

It’s important to remember that your Rank might fluctuate based on the actions of other players. However, you won’t be earning any further Credits for that week once you’ve played 40 matches, so win as many matches as you can on the most challenging difficulty level you’re confident with.

You can take a look at your existing rank via Squad Battles.

All FIFA 22 Squad Battles are slated to take place on Sunday at 7:05 AM UTC. All Squad Battles awards will be accessible at varying times based on where you’re living and also considering your local time zone. To help you plan, we’ve included the following time zones and when you may anticipate receiving your rewards: 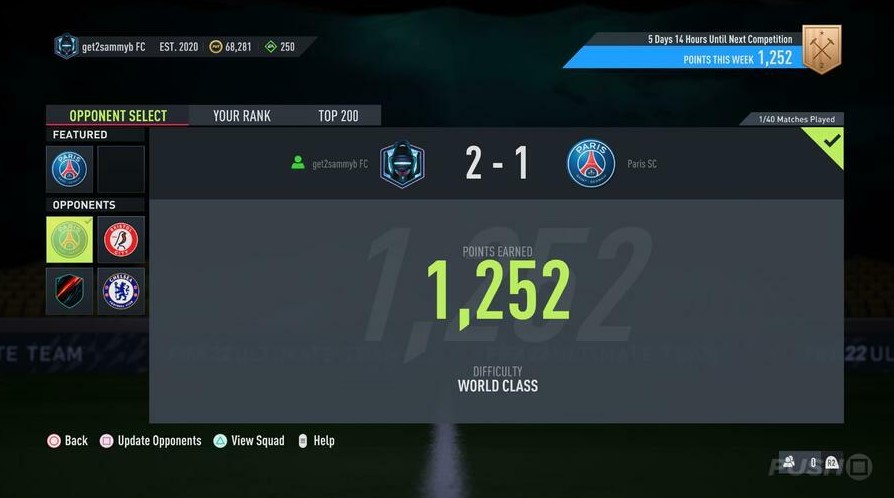 Keep in mind that to be eligible for awards, you must achieve at least Bronze Rank 3 in Squad Battles. So, buckles up and rules those 40 matches.