The goods for Marvel Studios’ Moon Knight may now be revealed, thanks to the film’s release. At least some of it. (We’re hoping for toys for some of the characters who appear later!) And a superhero as toyish as Moon Knight was bound to get a slew of action figurines. In a Marvel Must-Haves feature, Marvel unveiled the first of Hasbro’s Marvel Legends Moon Knight figures. They did, however, give us a glimpse of the figure for his second form, Mr. Knight, on a separate, now-defunct page. Both are expected to be included in the Infinite Ultron build-a-figure wave, which also comprises Hawkeye, Kate Bishop, and three unknown characters. Khonshu, on the other hand, would be a fantastic addition. Of course, Hot Toys always goes all out, delivering the kind of soft-goods cape that Hasbro would not. Theirs appears to have light-up eyes, but we’ll have to wait and see what the specifics are.

Based on the photographs released, an Oscar Isaac unmasked portrait does not appear to be included with either figure. Hot Toys occasionally adds an actor likeness afterward, but the Marvel Legends figure merely comes with a moon blade. Perhaps a Poe Dameron head might fit on the same peg, despite the fact that Hasbro hasn’t created him since the introduction of photoreal digital coloring.

We didn’t see much in the way of merch leading up to the release of Moon Knight on Disney+. The floodgates erupted two days following the broadcast of the very first episode, with the announcement of numerous major collectibles. Moon Knight Funko Pops are currently available for pre-order, as well as Marvel Legends and Hot Toys figures, which will be available for pre-order in the near future. 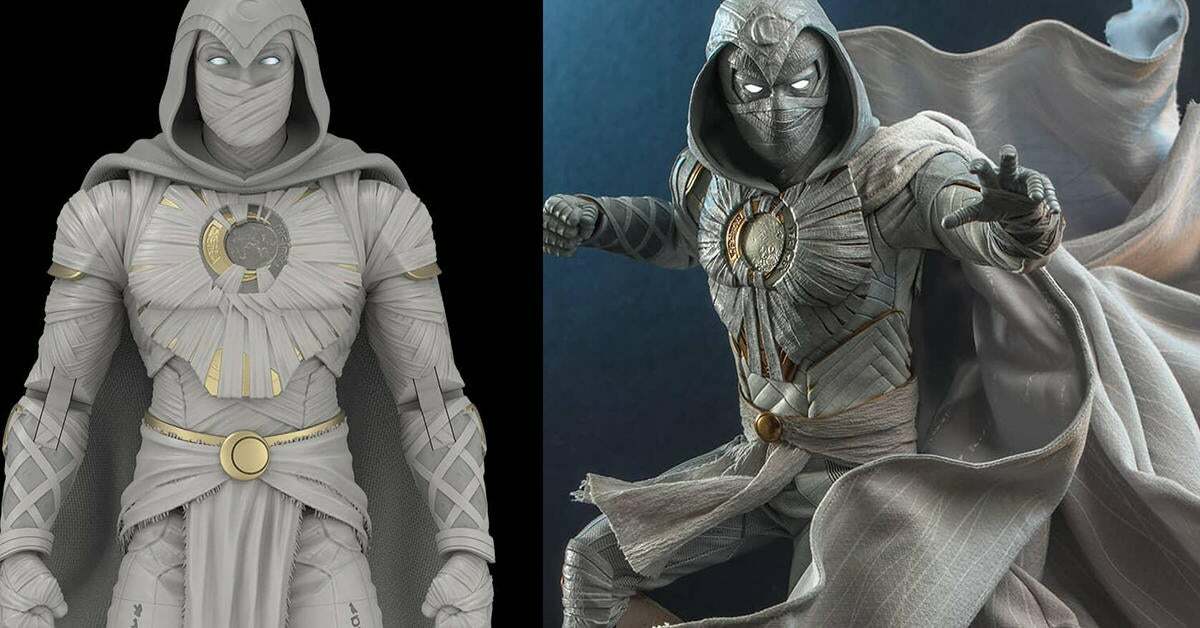 Details are scant at the moment, with both figurines having only been previewed by Marvel.com, but as the Disney+ Moon Knight sequence unfolds, we may expect weekly product deliveries. During that time, pre-orders for the Marvel Legends Moon Knight figure will be available at Entertainment Earth, while the Hot Toys Moon Knight figure will be available at Sideshow Collectibles. In the gallery below, you can have a further look at the figures.

Oscar Isaac discussed preparation for the Marvel role while appearing on Variety’s “Actors on Actors” with Morbius star Jared Leto.

“I’d never heard of ‘Moon Knight’ before, despite the fact that I used to collect comic books. ‘Morbius’ was familiar to me, but ‘Moon Knight’ was new to me. Because it’s a feature film and we’re a limited series, I’m not sure how the process went for you. There was a lot of leeways to explore new things because we weren’t under any obligation to produce hundreds of millions on opening weekend. As a result, we may make it exceedingly subjective. We might make some strange choices. At the moment, at least – and I don’t see it moving backward – it appears that more risk is being taken there since it can pay off financially “Isaac clarified.

→  5 Worst Superhero Video Games Ever Made

The Moon Knight series on Disney+ has the following synopsis:

The synopsis reads, “The series that follows Steven Grant, a mild-mannered gift-shop employee who is troubled by blackouts and recollections of another life.” “Steven learns he suffers from multiple personality disorder and is forced to share a corpse with mercenary Marc Spector. As Steven/foes Marc’s close in on them, they must juggle their dual identities while immersed in a dangerous mystery among Egypt’s mighty gods.””

Moon Knight Episode 1 is now available to watch on Disney+, with new episodes arriving every Wednesday.

Dark Future in the Hands of Destiny 2’s Season of Plunder and Lightfall Story!!! Get the Interesting Facts Here!

Everywhere Has Been Teased By GTA Producer! All You Need To Know About Is Right Here!

The Secret Yet To Know About Homeworld 3 Release Window! Read To Know More!