What is NATIONAL GIRLFRIENDS DAY? August 1? How to celebrate it?

National Girlfriends Day, which falls on August 1st, calls for women all around the country to come together and commemorate their unique friendships.

There are various types of girlfriends. While many people have a shared history, others meet at college or at work. Others, however, have far closer relationships; moms and sisters also fit the concept of girlfriends.

Even though we constantly think about these kinds of relationships, we frequently forget to make time for them. The day encourages the love and fun that girlfriends provide. Friends rarely let one another go it alone. They not only enjoy spending time together, but they also help one another. Friends give each other advise and celebrate achievements while having fun and exchanging secrets. Friends are there when it’s time for a long walk, a glass of wine, or a conversation over a cup of coffee.

Mother-daughter authors Kathleen Laing and Elizabeth Butterfield came up with the first official declaration of National Girlfriends Day in 2002, according to National Day Calendar®. They decided to celebrate the release of their book Girlfriends Getaway on September 20th. 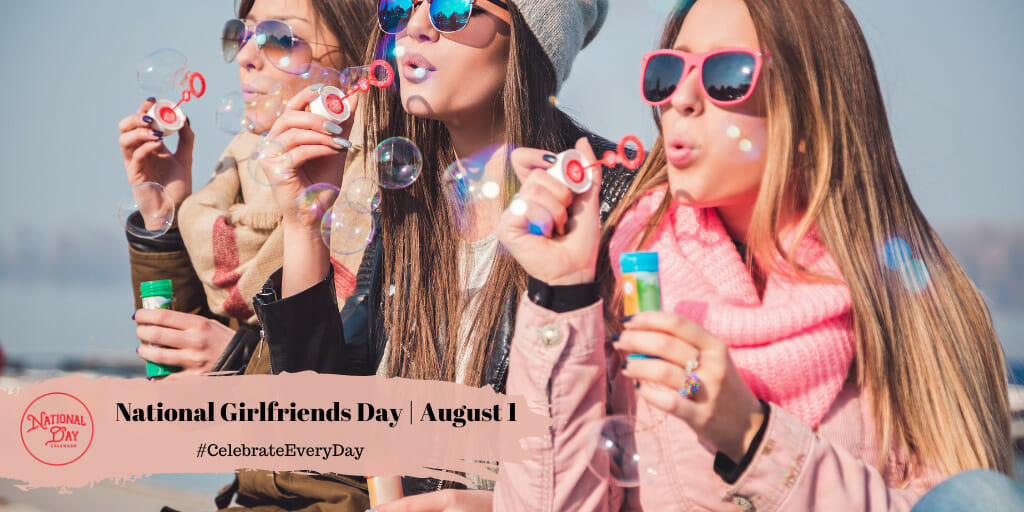 Although the originator of National Girlfriend Day, which falls on August 1, is unknown, Mistress Susan, who maintains an opulent website, appears to have the greatest case. According to her, she came up with the idea for a holiday in 2004 and encouraged others to celebrate it.

Of course, the history of female friendships and gal pals goes much further back than the actual day. Since girls have been friends for so long, it is impossible to identify the first female friends; instead, we will include some of the more well-known female friends from more recent times.

A group of female friends known as the “Edinburgh Seven” campaigned to become the first women to enroll in medical school in the UK in the 1860s. Despite attending Edinburgh University to study medicine, they were unable to complete their degrees and practice medicine. The legislation allowing women to study medicine at universities were passed in 1876 as a result of their desire to place women’s rights on the national agenda. The Edinburgh Seven had opened the path for future generations of female doctors.

→  The Division's Player Count Dropped By a Massive 93% Since Launch

At about the same period, a revolutionary friendship between Susan B. Anthony and Elizabeth Cady Stanton was developing. The two were the pioneers who battled for white women’s suffrage and founded the women’s rights movement in the United States. After first meeting in 1851, the two went on to found the National Woman Suffrage Association in 1869.

On a more sporting note, we would like to give special recognition to The Rockford Peaches, who were among the original players in the 1940s All-American Girls Professional Baseball League. Their accomplishments marked a significant advance for American female athletes.

Ella Fitzgerald and Marilyn Monroe are featured in one of our greatest tales of female friendship, and Fitzgerald credits Monroe with giving her the big break? In 1955, the singer attempted to secure a performance at the Mocambo in Hollywood, but the manager refused her because she lacked sufficient “sex appeal.” If Fitzgerald got the job, Monroe promised the manager she would sit first row every night, bringing in the press and throngs the management so desperately wanted. Later, Fitzgerald would say. I never had to perform at a small jazz club again after that.

More recently, Chris Evert and Martina Navratilova demonstrated that even strong opponents can become closest friends. During the 1970s and 1980s, the two faced off in an astonishing 61 tennis tournament finals, yet they remained the closest of friends off the court and frequently traveled to tournaments together and hung out between matches.

→  5 Best Racing Games Ever Made

Gal pals have a history of going against the grain to accomplish big things together and are always there for one another. On National Girlfriend Day in 2021, be sure to take some time to express your gratitude to your girlfriends.

Two further claims to National Girlfriends Day on August 1st do, however, also surface. The first is Mistress Susan, who began commemorating in 2003 at savionaire.com. The second is the online team of sisterwomen.com, Allie Savarino Kline and Sally Rodgers, who began their celebrations in 2006.

Observing National Girlfriends Day: How to Do It

Let your girlfriends know how special they are to you today and how much they mean to you. Think back on the past or your future aspirations when you go out for lunch or a drink. Send a thank-you note or a modest symbol of appreciation. Make plans with your girlfriends over the phone, perhaps. Make sure you don’t disregard these connections.

Whatever you do, keep in touch by reaching out frequently. To get ready for that important day, tell everyone about Amazon’s wedding registry. Use #NationalGirlfriendsDay while posting on social media.

One of the most special relationships in life is friendship.

Whether we have had one or many, girlfriends enhance, complete, and improve life. You may laugh at the craziest things in life with these pals. When things are tough, you turn to your girlfriend. In its most basic form, National Girlfriends Day honors all the ways that having our girlfriends in our lives makes them better.