Usman Abdul Jabbarhttps://www.GeeksULTD.com
21, Tech Enthusiast, Founder/Managing Editor at GeeksULTD and a stduent at the Holberton School. Passionate about UI Design and competitive Counter-Strike Global Offensive gaming.To contact me, follow me, or even constructively criticize me, contact me however you feel is right!
8.3

Logitech is no stranger in the PC peripherals market. The company has established its presence over the years for its excellent, high-quality peripherals. Logitech shows no sign of slowing down when it comes to trying new ideas, and the G403 is no different. Logitech’s G900 was Logitech’s first attempt to make Wireless mice a viable option for the gaming community. Logitech has sent over the G403 to us for this review, and boy does the mouse perform. The mouse is available worldwide for a decent price of US $89 / MYR 469 and seems to be an excellent option if you were willing to dive into the high-end mouse category in the first place. 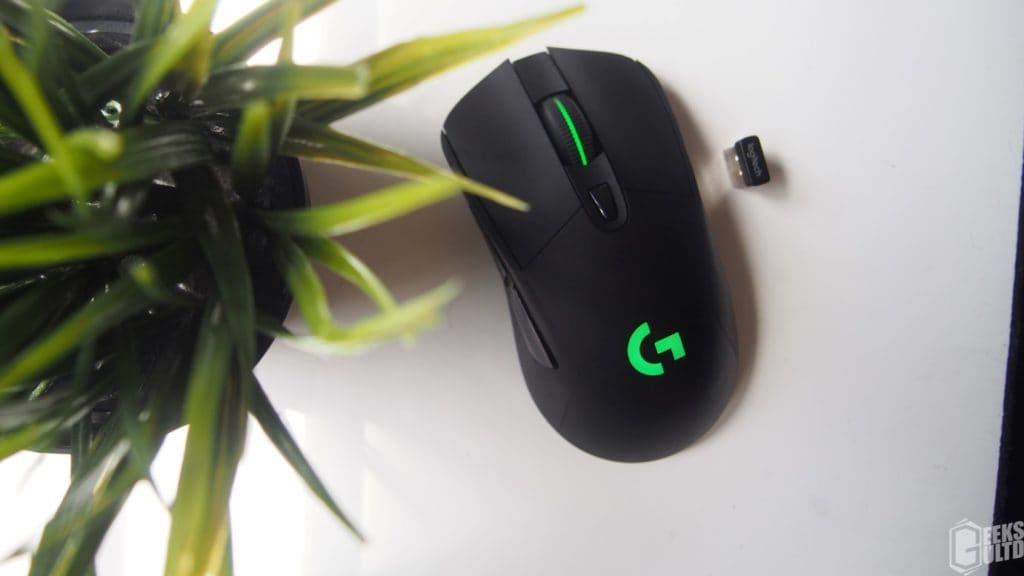 Aside from finding myself in joy after seeing the included USB cable, Wireless USB and the mouse itself. Nah, I’m just joking, just wanted to get the contents out there. Back to the design and build quality. The G403 Prodigy wireless gaming mouse comes in a more subtle design compared to its raging elder brother, the G900. While both of the mice do share a number of striking features, the G403 seems to be catering a niche for itself. The subtle design on the G403 makes it excellent for a new-comer to pickup and start grinding. That is, if the user is right-handed. Sorry lefties.

There’s a number of factors that bog down the possibility of a great mouse. If we take that statement for granted, wireless mice are bogged down by their batteries, performance, weight and their reliability. However, ever since Logitech has made their breakthrough with the G900, I could see some excellent times ahead for PC gamers making wireless mice an actual option for PC gamers. The G403 comes in two variants, a wired and wireless variant. Coming in at 107.2g, the G403 Prodigy Wireless packs its internal guts in a fairly solid 107.2g plastic body compared with the wired G403 that comes in at 87.3g. At the expense of about 20g, Logitech has manage to retain the excellent performance and consistency of the high-performance PMW 3366 sensor inside of the G403 Wireless. For those willing add some extra heft to the mouse, Logitech includes a 10g weight that could be installed under the mouse.

The mouse’s left and right-clicks have a rating of 20M clicks before they start wearing out which is a great sign indeed. I wish I had a machine to spam the click button to test the buttons out.

The G403 Prodigy Wireless seems to be catering those willing to let go of their cord. The G403 also wants to make sure that you get wired-quality gaming experience with its consistent performance. The G403 sits excellently in the hand too thanks to its excellent shape. This mouse would become and excellent pair right-handed FPS players who often find their hands in the palm-grip while holding their mouse. The best thing about holding the mouse is simply how its molded around every necessary edge giving you an excellent grip over the mouse. One thing I would have absolutely loved to see Logitech adding would have been some type of bank to the right side of the mouse to accommodate my pinky finger. But hey, it is a traditional design, its seems fine. 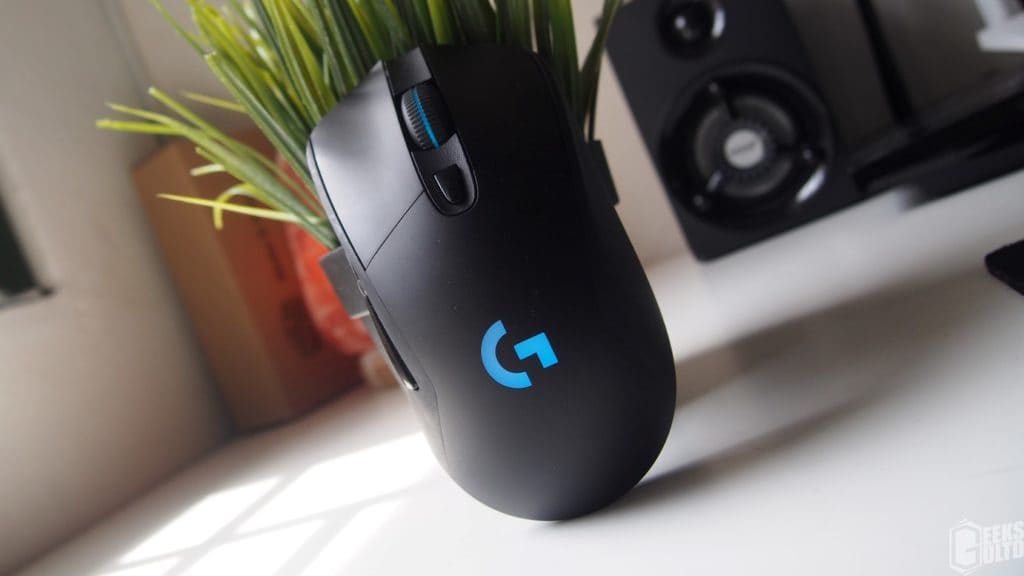 The G403 comes with one of the best sensors around. The PMW3366 has been Logitech’s awe for more than a while now. With their G900 and G403, it isn’t an exception either. With the extra 20g weight over the wired G403, I don;t think that it would be much noticeable to many newcomers or average players. 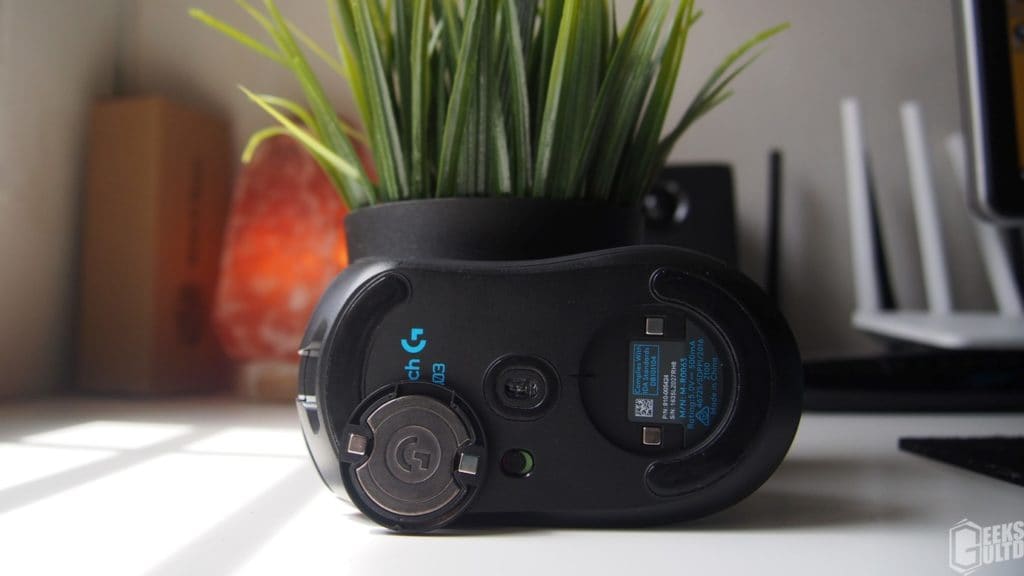 The RGB craze is implemented here. However in a more subtle manner. The G403 would be able to statically select any color between its two lighting zones, the scroll wheel and the main logo on the palm area. To customize the RGB flair on the G403, there isn’t a lot Logitech has offered but it seems like it should be satisfying to many players. There aren’t many effects available in Logitech’s suite. Just a color cycling mode and breathing mode. Players would also be able to select which of the two lighting zones do they want to lit up or disable it all together.

→  Cooler Master MasterBox Lite 5 Review: Hands-Down It Could Have Been Our Favourite $50 Full-ATX Case

Aside from taking Logitech’s word about the G403 Prodigy Wireless. Yes, I know professional players have actually embraced Logitech’s new wireless mice. But aside from that, the mouse performed excellently.

Regarding battery life, Logitech claims that the mouse would last you 24 hours on a full charge with the lighting zones lit. While turning off the RGB flair would get you 8 extra hours with a 32 hours battery life claim while using it wirelessly.

If you want to use the mouse in wireless mode, the mouse uses a 2.4GHz band, and as usual in an apartment with a number of other wireless devices around, the mouse performed flawlessly. 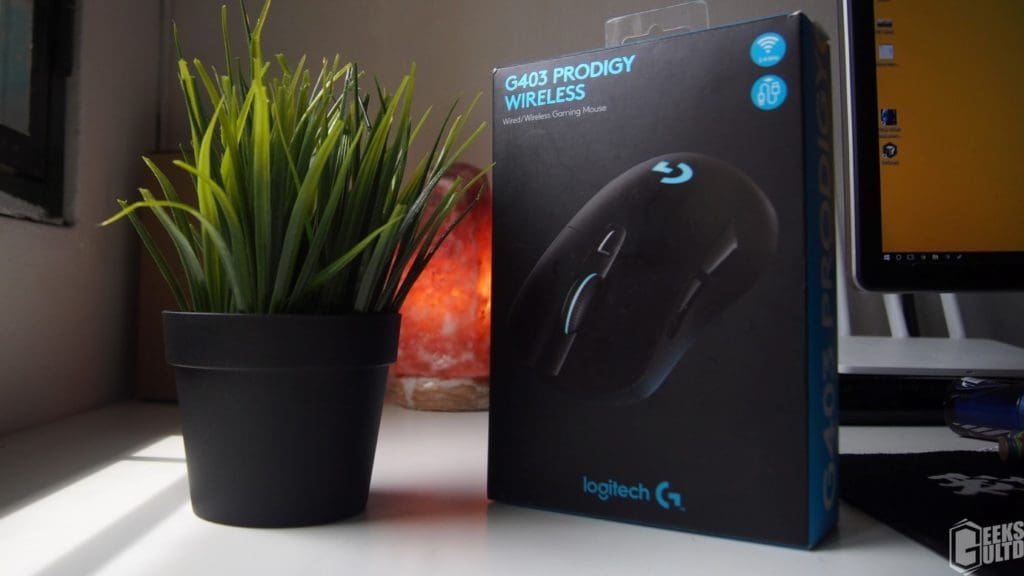 The G403 Wireless enters the upper-end of the pricing spectrum. During our tests the mouse performed admirably well. For RM469, I think users should be asking themselves, do you they really really really need wireless? If yes, and you can’t make it to the G900, the G403 is an amazing option out there clearing the cable clutter from your desk. However, if you’re a fan of the G403 and want a lighter mouse, just go for the wired version of the mouse that would set you back about RM239 here in Malaysia.

But hey, I am still dying to get the G502 despite testing the G403 Wireless that also utilizes the same sensor from Pixart, the PMW3366. Wink wink Logitech…

Logitech G403 Prodigy Wireless Review: An Amazing Wireless Gaming Mouse
The G403 Wireless enters the upper-end of the pricing spectrum. During our tests the mouse performed admirably well. For RM469, I think users should be asking themselves, do you they really really really need wireless? If yes, and you can't make it to the G900, the G403 is an amazing option out there clearing the cable clutter from your desk. However, if you're a fan of the G403 and want a lighter mouse, just go for the wired version of the mouse.
Design & Aesthetics
7.5
Build Quality
8
Performance
9.5
Features
9
Pricing
7.5
8.3
Share
Facebook
Twitter
Pinterest
VK
WhatsApp
Previous articleSony Unveils Three Star Wars Battlefront II PlayStation 4 Consoles
Next articleMicrosoft Teases A New Xbox One X Ad In The Making

The Characters For Finn Cole’s Animal Kingdom and Peaky Blinders Were So Similar, Were You Able To Make Out?

Here Are The Tips And Tricks That Will Guide You In Defeating Arlo In Pokemon Go, 2022