OnePlus has just announced the OnePlus 6T with a ton of new features. Interestingly, during the OnePlus 6T keynote, OnePlus took a few jabs at their fellow rivals claiming some intriguing facts about how long their phones last compared to their competitors. Their graph showcased some of OnePlus’s main rivals pitted in a graph showcasing their failure rates as of Q1 2018. 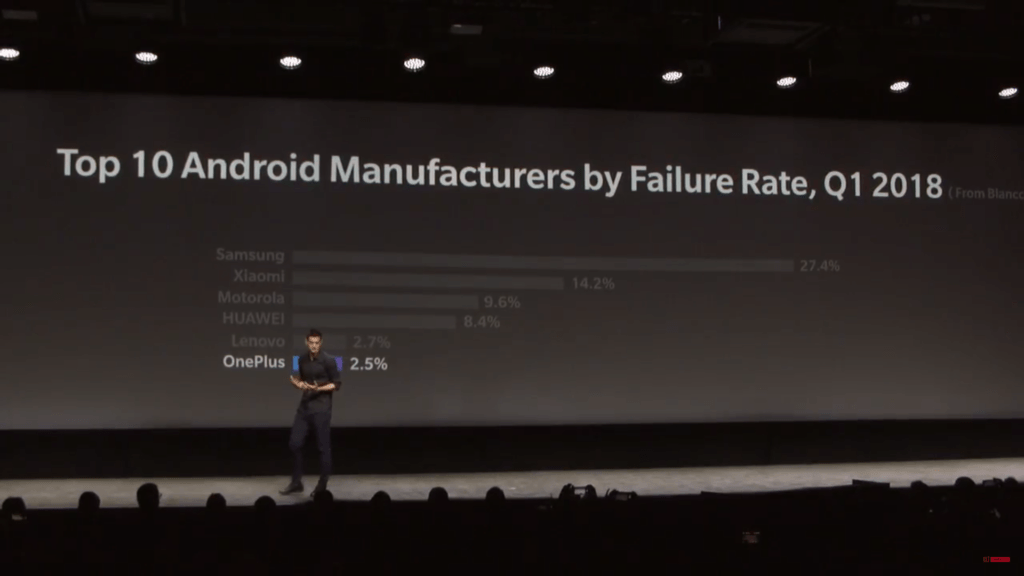 The graph seems to be taking throwing some large chunks of rocks to everyone else’s garden. While OnePlus didn’t seem to mention their source, it’s interesting to see that OnePlus put Samsung on top for having the highest failure rate from all of the brands mentioned below. If you’ve been following us lately, Huawei had also thrown a few bricks over to Samsung’s side at the Huawei Mate 20 and Mate 20 Pro keynote alleging that the Note 9 would lose about a quarter of its performance within the next 18 months or so. Samsung was soon fined after the fact as Italian Authorities found that the South Korean company wasn’t playing by the rules concluding that Samsung was indeed slowing down their devices over a number of OTA updates.

Coming back to the point, following Samsung’s 27.4% failure rate from the graph above, we could derive how the rest stacked up through the first three months of 2018. According to the graph at the keynote, Xiaomi has a failure rate of 14.2%, Motorola has 9.6%, Huawei has 8.4%, Lenovo has 2.7% and OnePlus themselves have a 2.5% failure rate. Certainly cheesy. Additionally, it’s also worth noting that the graph depicts OnePlus’s failure rates up until the OnePlus 5T launch given that the OnePlus 6 launched in June (Q2 2018).

What’s odd is that Apple hasn’t been mentioned here for some reason. Either OnePlus didn’t have their numbers or OnePlus isn’t ready to trespass into their territory yet. Although, with the report, we could definitely be assured that OnePlus is definitely taking failure rates in consideration too before the device makes its way out of the factory.