Armaggeddon Kevlar FTX 13 Review: One Step Forward, Two Steps Back – Skip This One

Usman Abdul Jabbarhttps://www.GeeksULTD.com
21, Tech Enthusiast, Founder/Managing Editor at GeeksULTD and a stduent at the Holberton School. Passionate about UI Design and competitive Counter-Strike Global Offensive gaming.To contact me, follow me, or even constructively criticize me, contact me however you feel is right!
6.3

The Kevlar FTX 13 finally brings a few extra features to the table compared to the Xonatron T13. We finally have support for a full ATX motherboard along with some excellent room for a 240mm radiator on top. Additionally, Armaggeddon also included RGB LED strips with the case and are pre-installed at the front of the case and at the top of the case.

Have they improved? Let’s find out! 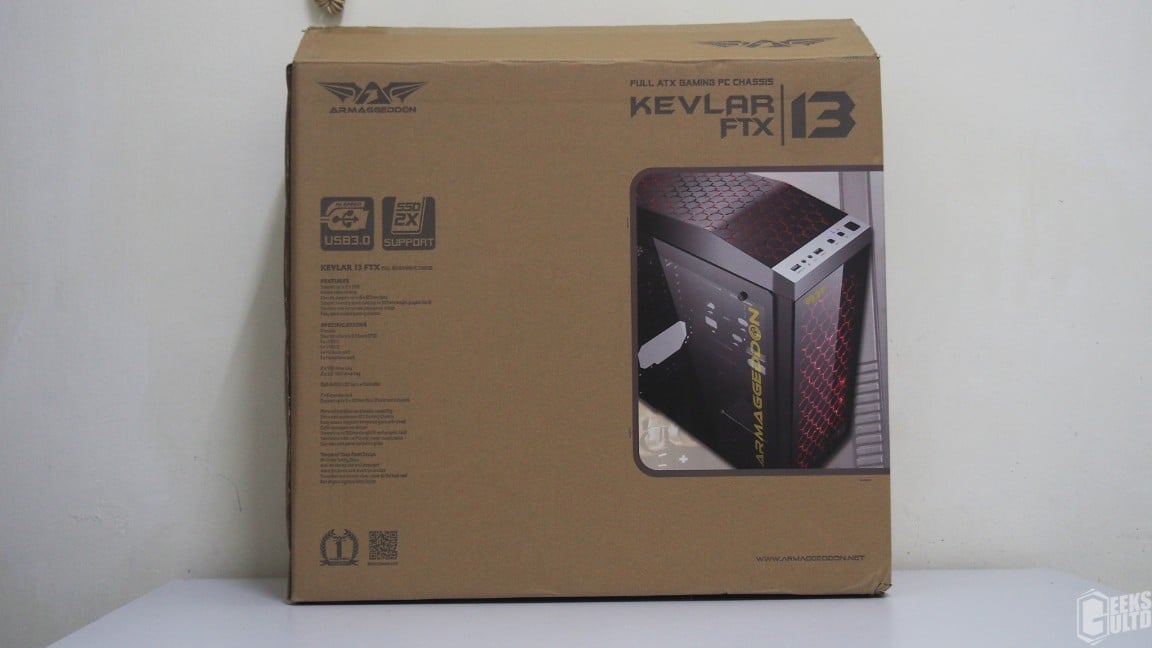 Cracking open the Kevlar 13 revealed the case packed in soft foam. Armaggeddon definitely took care of the safety of the casing during the shipment. 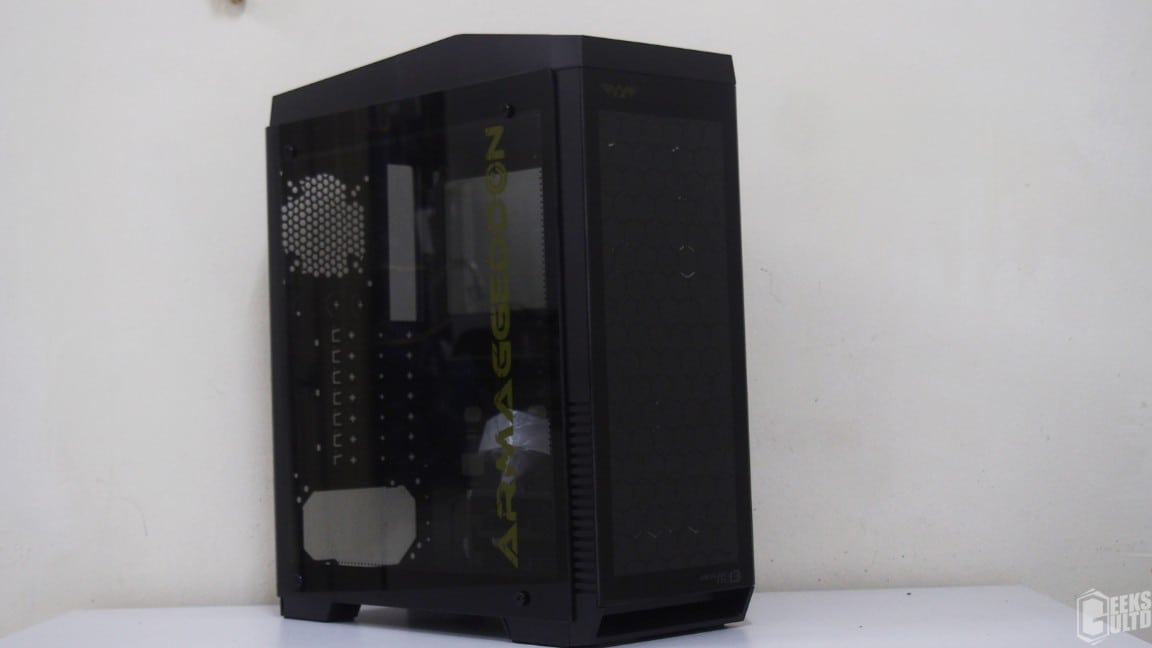 Ripping apart the protective foam and plastic layer, we finally get a full glimpse at the tempered glass side panels. Armaggeddon included two glass side panels for the front and back of the case just the Corsair’s Crystal Series, most notably the 570X to showcase your cable management.

Sadly taking a look inside the case revealed the absence of any fans. Therefore, we decided to add our own. The front of the case is made of clear plastic to showcase your LED fans. Other than that, the bling bling is in the inside.

At the front you can add two 120mm fans, on the top you could install a rad or two 120mm fans. Coming over at the back, you can install one single 120mm fans and a few smaller fans if they even exist nowadays. 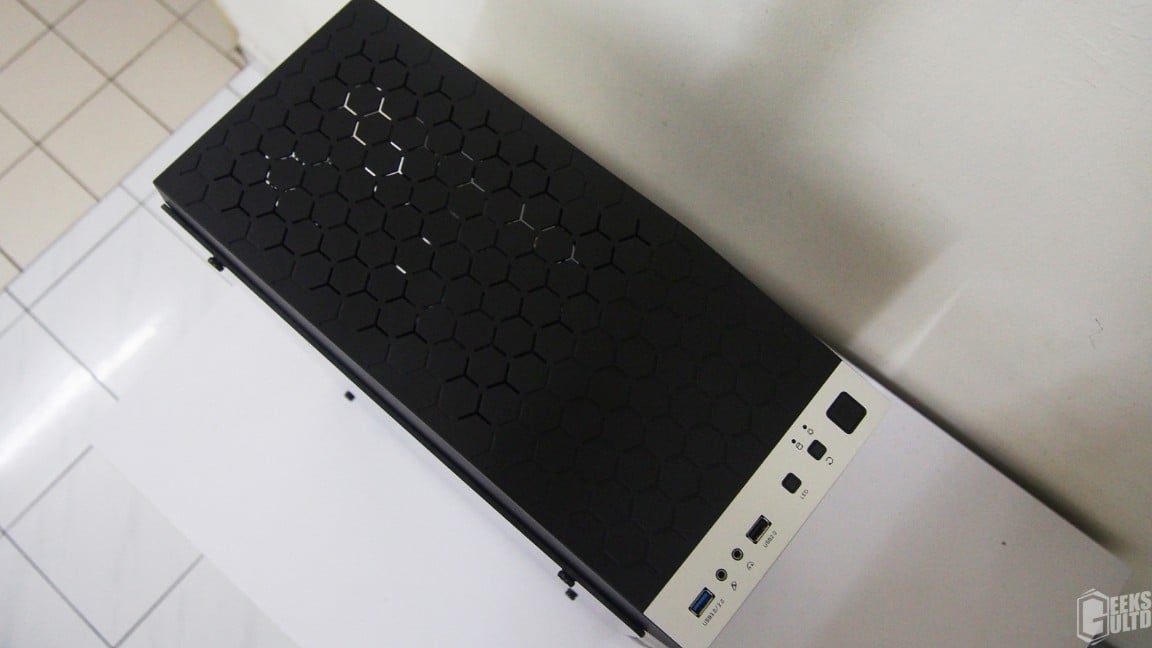 Coming over to the top of the case, we can find a honeycomb shaped ventilation area for those who popular the top portion of the case with fans. And then we could have a look at the front panel connections. You’ll find the Power Button, a reset button, one USB 2.0 port and a single USB 3.0 port flanking the audio connections for your sound output and microphones.

Removing the side panels revealed what Armageddon actually offered. 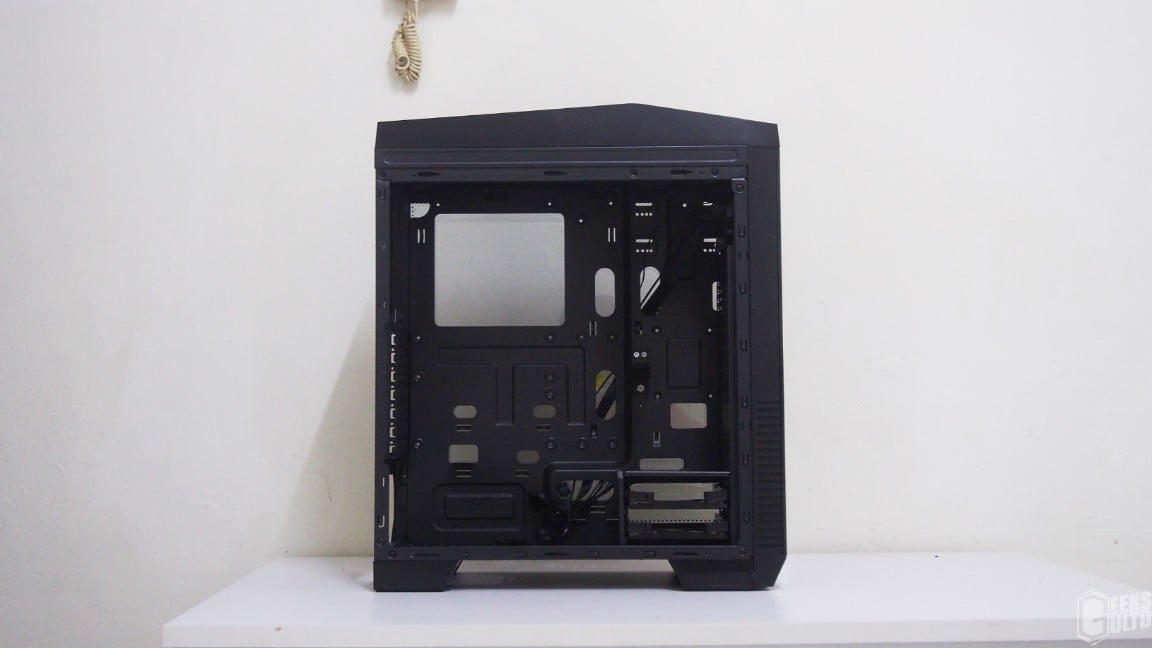 The first thing we noticed was the absence of pre-installed motherboard standoffs. We had to manually install them. On top of that, since Armageddon didn’t include any tool to help us tighten those standoffs we opted for simple plyers. Then we noticed the absence of cable grommets to cover the cut-outs. Cable grommets are very necessary, especially for a case like this. 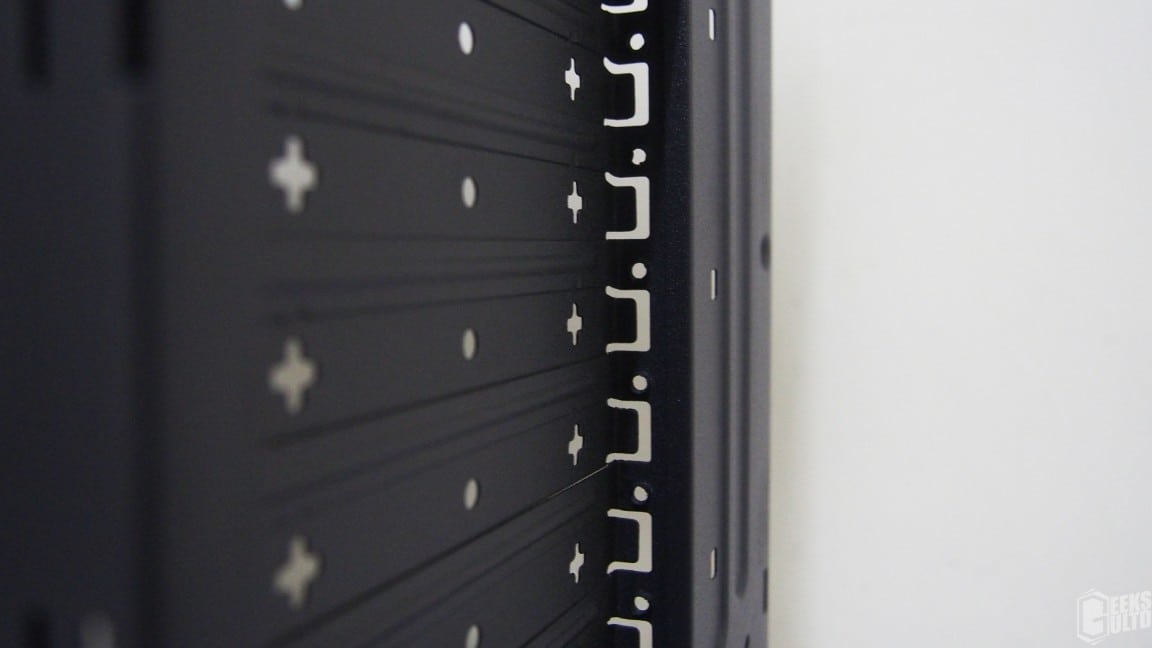 Taking a look at the back of the case left an even further disappointing situation when we found out that the PCIE covers will be permanently gone if we remove them just like cheap cases.

Coming back to the inside, we found that there’s no space for the PSU cables. After completing our build, we found that we couldn’t close the back glass panel, it couldn’t handle the thick 24-pin motherboard cable. Coming from the Phanteks P400S TG, I was really disappointed with the cable management, let alone the absence of the PSU shroud. 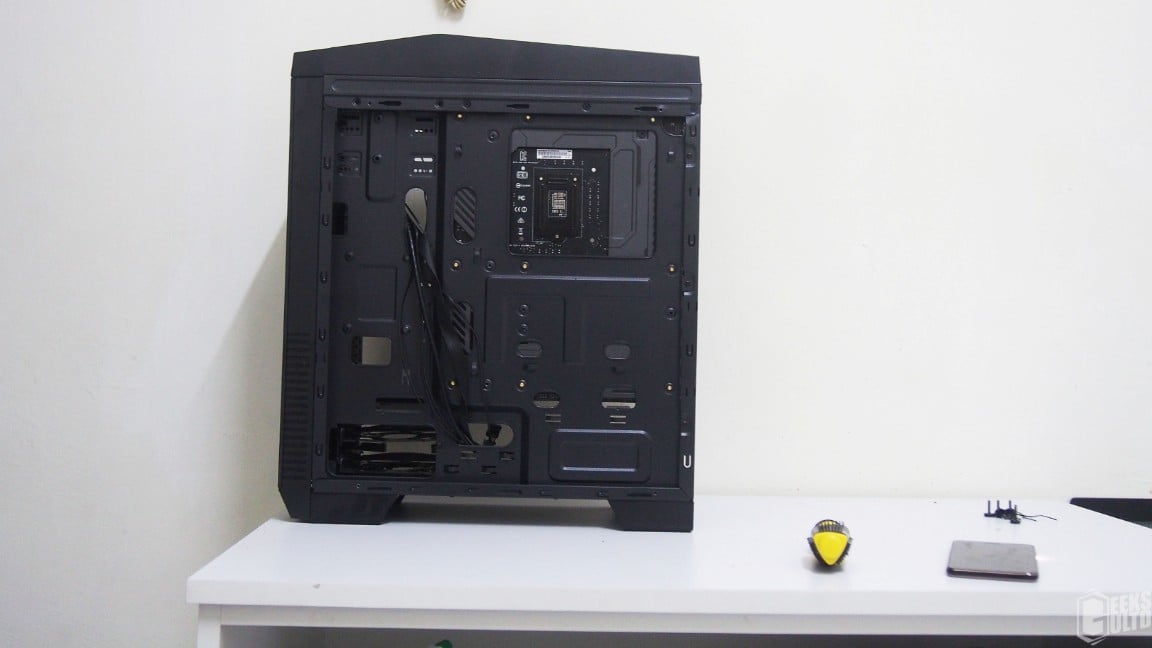 After installing the motherboard, we found that the two cutouts were now blocked, since the Asus Maximus IX Formula isn’t a small motherboard. I was left with one cutout and had to push the 24-pin ATX cable along the indents of the case and hold them with zip ties at the back of the case.

After getting that through, we decided it’s time to install the front panel connections. Since the wires weren’t long enough, we had to just pull them jerry-rigging the cable management at the back.

And thanks to the glass panel for the rear side of the cable, we were able to show off how bad our cable management was despite using a modular PSU. 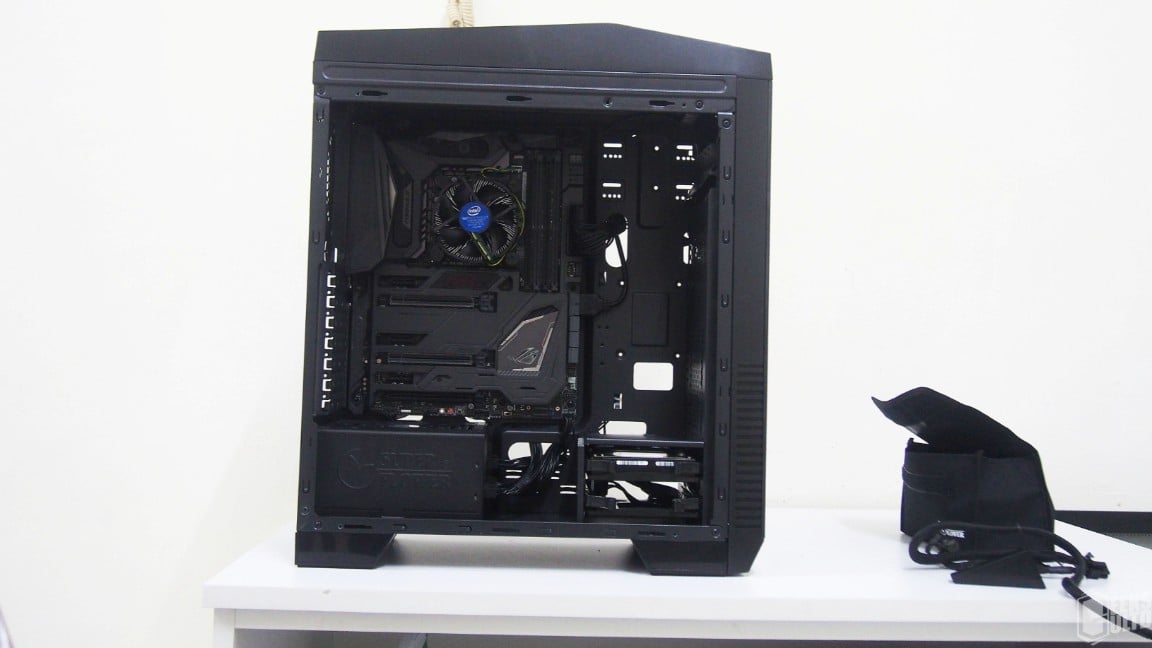 Despite all Armageddon did with the FTX 13, we were quite disappointed with that Armaggeddon has to offer. And at the price of RM349, the competition will not forgive Armaggeddon’s offering with brands like Phanteks and NZXT arriving in the league. However, if the price was lower, the case would have been forgiving. We think that the high price came from the two glass side panels on the case.

We would recommend Armaggeddon to instead stop investing in the back tmepered glass panel and fix the rest of the issues such as the limited clearance behind the motherboard tray, add cable gromets, cutouts and even have pre-installed motherboard standoffs for their next case.

With all of these problems and competition we simply couldn’t recommend this case to many users.