Honor has been the go to brand for Huawei. Targeting the budget smartphone consumers Huawei have been in active development of the franchise competing against brands like Xiaomi, Oppo and One Plus etc.

The Latest addition to the franchise will be the Honor 8x Max. Although leaks have already been reported ahead of launch as it goes with every other smartphone these days. The race for the most insane screen to body ratios continues and here’s Honor’s take on it. 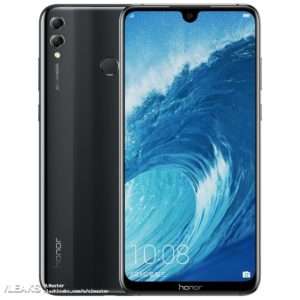 Now here we can tell that the new 8x Max will follow the DNA of the previous Honor devices however this time around Huawei have gone to the extreme by minimizing the above “notch” to mere spot. The rear will host a finger print scanner and a pair of camera’s but the highlight of this device is the notch.

Huawei have taken this bold decision but the question is that what will happen to all those sensors and how will they accommodate them inside the phone. Given their recent moves Huawei are catching up with the underdogs of the Asian region and the Honor franchise will play an important role specially in India and regions around China.

The new Pocophone F1 out Huawei will have to play out something new and this could be it.